Skip to content
Home » Knowledge Centre » Studies of Religion (SOR) » What is Judaism?

Judaism is the mother-faith from which Christianity and Islam developed. All three date back to Abraham, who discovered the one, true, invisible God. At Mount Sinai, several centuries later, Moses and the Israelites received the Torah (‘teaching’), which revealed the way God wished to be served. Belief in one God, as taught by Moses, is the basic principle of Judaism.

Judaism is based around the idea that God is supreme; the creator of all things and the powerful being whom we communicate with through prayer. God appears on almost every page of the Jewish Bible. He is present all through the Jewish liturgy: in the Siddur (prayer book), Passover Haggadah and various songs and poems, to name a few.

The Torah gave rise to many commentaries, interpretations and codes of conduct, at first passed on by word of mouth (‘the Oral Law’). Much of this material was written down in the 5th century in the Talmud (‘Learning’), a great work in 63 volumes. Apart from the ethical and theological teaching, the Talmud contains closely reasoned discussions on Judaism, stories about the sages, and information on legal, historical, social and even scientific matters.

These principles of the Jewish faith were formulated by Moses Maimonides (13th century):

The Jewish Way of Life

Judaism contains duties to God, especially modes of worship and rituals, and to human beings, especially truth, justice and peace. Jewish ethics stress business, professional, public and personal morality. Marriage and the family are especially important to Judaism, as are education and charity.

While it believes it is the true faith, Judaism respects other religions and upholds freedom of conscience and belief for all human beings. 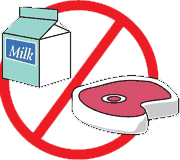 Observant Jews eat only kosher foods (food permitted according to Jewish law). Kosher meat must come from a permitted animal or bird (ham, bacon, pork and shellfish, for example, are not kosher), carefully slaughtered by a religiously knowledgeable person. The meat is soaked in water and then salted and rinsed in order to remove the blood.

Meat and dairy foods are not cooked, served or eaten together. Kosher homes have separate meat and dairy utensils.

In ancient times, Jews had a temple in Jerusalem, which will one day be rebuilt. The Jewish place of worship is the synagogue, where prayer takes place facing towards Jerusalem. Public worship requires a minyan (quorum) of ten males aged 13 or older. In Orthodox synagogues, men and women sit separately and the service is conducted by males.

Judaism has its own calendar and the dates of Jewish holy days are set according to that calendar. The calendar has lunar months, but a ‘leap month’ is added in some years to keep the Jewish year aligned to the solar year.

The Sabbath is a day of rest from work, lasting from sunset on Friday until nightfall on Saturday. Features of the day are the synagogue services and the family gathering at home. Sabbath candles are lit before sunset, and prayers of sanctification are said over wine and bread.

Pesach (Passover) lasts eight days and marks the deliverance of the Israelites from slavery in Egypt. On the first two evenings (first evening only in the land of Israel) there is a home ceremony with symbolic foods recalling the bitterness of slavery and the sweetness of freedom. The main Passover food is unleavened bread known as matzah, eaten to recall the “bread of affliction” in Egypt. Passover is the time of the barley harvest in Israel.

Shavuot falls seven weeks after Passover. On Shavuot God gave the Torah at Mount Sinai, so that it is an occasion for renewed dedication to the Divine law. It is the time of the wheat harvest in Israel.

Rosh HaShanah (the New Year) is the anniversary of creation when God reviews His world and examines the deeds of human beings. The shofar (ram’s horn trumpet) is blown as a call to spiritual wakefulness.

Yom Kippur (the Day of Atonement) is a 25-hour fast largely spent in prayers for forgiveness and in making resolutions for the future. Yom Kippur falls ten days after Rosh Hashanah.

Sukkot comes at the end of the fruit harvest in Israel. The sukkah or harvest booth recalls the portable homes of the Israelites in the wilderness on their way to the Promised Land. The sukkah symbolises the fragility of life and the need for God’s protection.

The Jewish population of the world in 2019 was estimated to be 14.7 million. This compares to a world Jewish population of 16.7 million in 1939 prior to the start of World War II and the Sho’ah (Holocaust) in which 6 million Jews perished and many Jewish centres of learning were annihilated.  The two largest Jewish communities in the world today are in the United States of America (5.7 million in 2019) and Israel (6.8 million in 2019), with Israel being the only country in the world where the majority of the population (about 74%) is Jewish. Israel, established in 1948, is now the cultural and spiritual centre of world Jewry.

Jews have lived continuously in Australia since the time of the First Fleet (1788) and in 2019 numbered about 118,000. Today, most Australian Jews live in cities, especially the major cities of Melbourne and Sydney, but in the 19th and early 20th centuries a number of country towns had active Jewish communities and synagogues. Despite the relatively small size of the Australian Jewish community, its members have always taken an active part in Australian public life.

The word ‘Israel’ is used to describe the Jewish people as well as their land, ‘Eretz Yisrael’ (The Land of Israel).

Eretz Yisrael has always been a very special place for the Jewish people. The famous commentator Rashi explains that the Bible begins with the story of creation in order to show that the Jews have a rightful claim to the land since it was given to them by God, the Creator of the world. One of the first stories in the Torah describes how God told Abraham to leave his home and migrate to the land of Canaan (known today as Israel).

Many of the mitzvot (commandments) in the Torah can only be carried out in Eretz Yisrael as it is here that the Temple once stood and where thousands of years of Jewish history took place.

Ever since the exile (about 2000 years ago), Jews have yearned to returned to Israel, also known as ‘Zion’. The theme of returning to the Jewish homeland is consistently reflected in Jewish literature: songs, daily prayers and other sources. Religious Jews and Zionists believe that all Jews from all around the world will one day return to the land of their ancestors, the land that is a central theme in Judaism. It is also important to note that despite the majority of Jews being exiled from the land of Israel for centuries, a small Jewish population did continue to live in the land and especially in the city of Jerusalem.

Love the Lord your God with all your heart, soul and might (Bible)

Love your neighbour as yourself (Bible)

Justice, justice shall you pursue (Bible)

Know before Whom you stand (Talmud)

In every age when the cry of despair is heard, the Jew hopes (Edmond Fleg)

Seek peace and pursue it (Bible)

What does the Lord ask of you but to act justly, love mercy, and walk humbly with your God? (Bible).

The above video features Rabbi Berel Wein, a popular Orthodox rabbi with a wide following, who was born in the USA and moved to Israel in 1997.