The second of the three Pilgrim Festivals, Shavuot, is celebrated for 2 days outside Israel (and in Israel for 1 day). The name ‘Shavuot’ means ‘weeks’ because it occurs 7 weeks after the 2nd day of Pesach (Passover). It falls on the 6th and 7th days of the Hebrew month Sivan.

Shavuot is also the anniversary of the day when the Torah was given to the Jewish people on Mount Sinai. That day was a very unusual one, with lightning, thunder and the earth shaking. Moses came down from the Mountain, face glowing, and read the Ten Commandments to the Children of Israel. 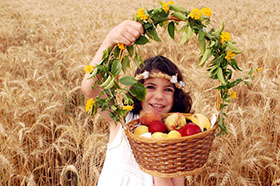 In biblical times, Shavuot marked the harvest of the wheat crop, the last grain harvest of the season, and the beginning of the fruit harvest. A major feature of the celebration was the ceremony of bringing the ‘first fruits’, or bikkurim, of the harvest to the Temple as an offering of thanks.

The bikkurim were carried in beautifully decorated baskets. Families would gather together to walk to Jerusalem and they would sing, dance and have music playing whilst they walked. When they arrived at the Temple, they gave the bread and fruit to the priests (kohanim) who would bless them.

How do we celebrate Shavuot?

On Shavuot we decorate our synagogues and homes with greenery, flowers and even fruits. This recalls the fact that on the day the Jewish people received the Torah, Mount Sinai bloomed with flowers. Using greenery also represents the harvest, another central theme of the festival.

It is traditional on the eve of Shavuot to stay up all night learning Torah. This custom is called Tikkun Leil Shavuot, which means ‘an act of self-perfection on the night of Shavuot’.

This custom comes from the Midrash, which tells us that the Jewish people were neglectful in receiving the Torah, in that they slept in that morning and were nearly too late to receive it. Consequently, there is a custom to stay up the entire first night of Shavuot learning and studying Torah and thereby demonstrating how important it is to us and our eagerness to receive it.

Tikkun Leil Shavuot is an extremely important mitzvah (commandment) because “the study of Torah is equal to the sum total of all other mitzvot” (Talmud – Shabbat 127a).

Reading the Book of Ruth

The biblical Book of Ruth is traditionally read on Shavuot, usually in synagogue after the reading of the Torah. This short book of only 4 chapters has many links to Shavuot, including that the main part of the story took place at the time of the wheat harvest, that it tells the story of Ruth, a famous convert to Judaism (and the rabbis teach that the Jews themselves were as if converts at the time of the giving of the Torah).  Ruth was the great-grandmother of King David who, according to Jewish tradition, was both born on and died on the festival of Shavuot.

On Shavuot it is customary to eat dairy foods, including cheesecake, cheese-filled pancakes and quiches. Some people also bake tall cakes to remind us of the height of Mount Sinai. Other people eat fruit, in particular the seven species of the land of Israel.

Many reasons for eating dairy foods on Shavuot have been given, but the main ones are:

Pilgrimage to the Western Wall (Kotel) in Jerusalem on Shavuot

Shavuot is one of the three pilgrim festivals, upon which in Biblical times the whole Jewish nation would gather in Jerusalem to celebrate and learn Torah. In 1967, the Six Day War ended just a few days before Shavuot. Israel had just reclaimed the Old City of Jerusalem which contained the Western Wall of the Temple, and for the first time in 20 years Jews had access to their holiest site.

On the day of Shavuot itself in 1967, the IDF opened the Western Wall to visitors for the first time (this was shortly after the 6 Day War; previously Jordan had controlled ‘East Jerusalem’ including the Old City and the Kotel (Western Wall) and had not allowed Jews to access them). On that day, over 200,000 Jews journeyed by foot to the Western Wall.

In the years since, the pilgrimage has become a tradition for Jews following their Tikkun Leil Shavuot. On the morning of the festival, the streets of Jerusalem are filled with tens of thousands of Jews walking to the Western Wall.

Given the close association between Shavuot and Torah study, many Jewish schools in the northern hemisphere hold their graduation ceremonies on or near Shavuot. This practice is not observed in the southern hemisphere where Shavuot does not fall near to the end of the school year.

For more information about the Jewish holiday of Shavuot (including suitable recipes), please see our page Links to Other Sites & Pages About Shavuot.

INDEX OF PAGES ABOUT JEWISH HOLYDAYS