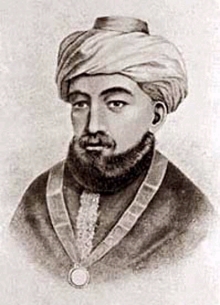 Moses Maimonides is the English name for Moshe ben Maimon (‘Moses, son of Maimon’). In Hebrew he is called by the name Rambam (pronounced rum-bum) which is an acronym for Rabbi Moshe ben Maimon (with vowels added in to make it possible to pronounce the word). The English name Maimonides (pronounced Mai-mon-i-dees) is formed by taking the name Maimon and adding the suffix -ides which is derived from the Greek and means ‘son of’.

Rambam’s impact on Judaism was (and is) immense, and he probably affected Judaism more than any other individual Jew during the last 2,000 years. A true Renaissance man, albeit one who lived long before the Renaissance, and who lived in Muslim lands rather than Christian ones, his insights into philosophy, medicine and Torah remain remarkably prescient today.

Maimonides (1135-1205) was born in Cordoba, Spain. Spain at that time was largely under Muslim rule, but at the time of Maimonides’ birth even in Muslim-ruled areas there were flourishing Jewish communities due to the ‘protected’ status which Islam accorded to Jews and Christians (the ‘protection’ was extended to ‘Peoples of the Book’, i.e. Jews and Christians, who would not be compelled to convert to Islam). However, in 1148 the Almohads (a fanatical Muslim group originating from northern Africa) conquered Cordoba and replaced the previous Muslim regime; the ‘protection’ was withdrawn and Jews were forced to choose between death and conversion to Islam. Maimonides’ family left Cordoba and, after a period, came to Fez in Morocco. In 1165 Maimonides went to Palestine, but soon afterwards settled in Fustat, near Cairo in Egypt, where he was court physician to the Sultan Saladin. He was also the nagid (head) of the Egyptian Jewish community. His fame spread as far as Yemen, from where Jews sought his rulings.

Maimonides began writing when only 16 years old. He began his Kitab al-Siraj, an Arabic commentary on the Talmud, when he was 23, and finished it ten years later. It contains the bold essay, Thirteen Attributes of Faith – a list of essential Jewish beliefs (something that had not been compiled before). Although initially controversial in some Jewish circles (since Maimonides had ‘dared’ to decide which beliefs were essential and which not), his list became well accepted with time and the basis of the much-loved prayer Yigdal which closes Friday night services and is one of the opening prayers of the morning service (there are some variations as to when the prayer Yigdal is done, depending on the particular tradition of the congregation).

Maimonides next wrote the Mishneh Torah, an exposition and summary of Jewish law in Hebrew. This pithy book was intended make the laws accessible to common people. Yeshiva (rabbinical college) students use it to this day.

The rabbi’s most loved book is Dalalat al-ha’Irin – ‘Guide for the Perplexed’ (translated into Hebrew as Moreh Nevuchim). It addresses everyday moral dilemmas and synthesises Jewish revelation with Aristotelian philosophy. However, many rabbis feared that such rationalising would undermine their authority. They attacked him in his lifetime; in 1233 one French rabbi even persuaded church authorities to burn the Guide as a heretical book.

Indeed, Maimonides argued that Judaism was valid from both a rational and spiritual perspective. Some even call him the forefather of the Jewish Enlightenment (haskala) of the latter 18th and early 19th centuries.

Maimonides was not a secularist. He remained a strictly observant Jew to his last day. In many respects he defined normative Judaism, both in his own Sephardi world and in the rabbinical Ashkenazi academies.

Maimonides is equally cherished as a medical pioneer. It was said that if the moon came to him as a patient, he could cure her of her spots! He wrote with extraordinary foresight about how cleanliness could prevent disease; gave advice on sexual hygiene; and compiled lists of cures for illnesses and fevers. Maimonides opposed the false claims of magic. While himself a scholar of the Kabbalah (Jewish mystical traditions), he warned against its abuse by less-knowledgeable people.

The Rambam’s grave in Tiberias, Israel, is a shrine for pious Jews. Yet he also symbolises an age of amazing cross-fertilisation between the sister faiths of Judaism, Islam and Christianity. His enduring legacy is his vast range of writings.

An excellent short (8 minute) introduction to the life, significance and impact of Maimonides

This short video by Rabbi Dr Benjamin Elton of The Great synagogue, Sydney,
gives a brief introduction to Maimonides’ ‘The Guide for the Perplexed’

An accessible 56 minute video about Maimonides and his writings, their reception, and their legacy and lasting impact

This 42 minute podcast features 3 scholars discussing the historical context in which Maimonides lived, and the content and significance of his writings