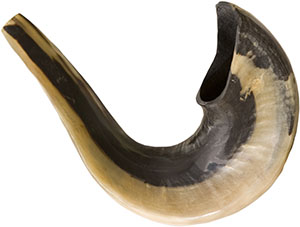 The word shofar is related to the Hebrew word shefoferet (‘tube’ in English) and derived from a Hebrew form implying hollowness. This infers that the shofar is an empty vessel, and that it is only important and useful when the breath of man is blown into it. The shofar thus symbolises the human being on Rosh HaShanah, who is likened to a hollow instrument that is capable of divinity once appropriately filled.

HOW TO BUY A SHOFAR

The first place to look for a shofar is locally, in a Jewish bookstore. If there is no Jewish bookstore nearby, ask your local rabbi or Jewish community services office. A shofar may not be available for sale all year round – you are most likely to find them for sale in the period leading up to Rosh HaShanah.

A popular alternative is to buy a shofar in Israel if you happen to be visiting there. Judaica shops abound and most have at least a few shofars for sale. Just remember when returning to Australia to declare the shofar to Australian Customs, as a shofar is an animal product. There should be no problem with Australian Customs allowing a shofar into the country provided it is declared and was made properly.

WHY JEWS BLOW THE SHOFAR

According to the famous Jewish scholar Maimonides, the shofar is blown during the Days of Awe to commemorate the beginning of the world, . It signifies the return to the beginning of time in order to make a new beginning in our own lives.

Saadia Gaon gave ten reasons as to why Jews blow the shofar. The author Shai Agnon, in his book Days of Awe, cites some of these reasons:

The shofar is also blown to mark the beginning of teshuvah, in order to warn the people: “Let all who desire to turn in teshuvah, turn now: and if you do not, you will have no reason to cry injustice’ ” (Agnon, Days of Awe; New York, 1965). Teshuvah is the Hebrew word for repentance and comes from a root meaning to return, thus implying a return to the right and proper path. Particularly between Rosh HaShanah (Jewish New Year) and Yom Kippur (the Day of Atonement), Jews are encouraged to consider their past actions and do teshuvah, to return to the path God has set for them and ask for His forgiveness.

Another reason given by Saadia Gaon for the blowing of the shofar is that it serves as a reminder of the time at Mount Sinai, when the Ten Commandments were given. It is said that the sound of the shofar reminds us of when our forefathers decreed “We will do and obey” (Exodus 24:7).

Saadia Gaon also stated that we blow the shofar to cause trembling and fear amongst the community, as a reminder of God’s omnipotence: “Shall the horn be blown in a city, and the people not tremble?” (Amos 3:6).

According to another tradition, the shofar is blown to confuse Satan, who hates its sound because of all that it represents. It is said that when the Messiah comes and the shofar is sounded, Satan will be completely disoriented.

The word teruah, which is called out during the blowing, means ‘loud’ or ‘wailing’. As it is mentioned immediately before shofar in the above verse, it is sounded in between two normal shofar blows. These are called tekiot, or tekiah in singular and are sounded as well; tekiah teruah tekiah!

The Torah orders the blowing of the shofar in three places: Leviticus 25:9, Leviticus 23:24 and Numbers 29:1. Each verse uses the word teruah, which is interpreted to mean that the tekiah teruah tekiahsequence is blown three times.

The Tekiat Shofar, or ‘Order of the Blowing of the Shofar’ commences after the Torah and Haftarah have been read on Rosh HaShanah. Verses from Psalms are recited and the shofar-blower makes two blessings. The shofar is hidden in the tallit of the shofar-blower until it is time to blow.

There is a designated caller who calls out tekiah, which is followed by a blow, shevarim teruah and thentekiah. This is repeated three times, followed by the next round of tekiah shevarim tekiah. At the very end of the last cycle, the tekiah teruah tekiah, the caller calls out tekiah gedolah – large blow – for the lasttekiah. This is ensued by more recitals from Psalms.

The Torah scrolls are then returned to the ark and Musaf begins, including three special sections:Malkhuyot – Kingships, affirming God’s sovereignty, Zikhronot – Remembrances, in reference to the forefathers and the covenant God made with them, and Shofarot – Horns, alluding to the sounds heard at the giving of the Ten Commandments, and those to be heard when the Messiah arrives. The shofar is blown at the end of each section, according to the custom of the community.

It is vital to have intention on the parts of the hearer and blower alike in order for the mitzvah of shofar to be fulfilled. The hearer must display his intention to listen completely by answering “Amen” after the blessings. The blower must think to himself that he intends to fulfill the mitzvah for the listeners.