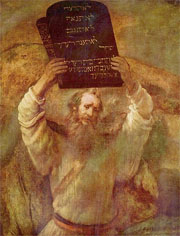 Moses was the greatest leader of the Jewish people. His actions dominate three of the five books of the Chumash (Five Books of Moses, the first five books of the Bible). More than that, Moses led the Jews out of slavery in Egypt and gave the Ten Commandments to the world. In Hebrew he is known as Moshe משה and often referred to as Moshe Rabbeinu (‘Moses our Teacher’).

Several contemporary non-biblical sources corroborate the existence of a dynamic personality in the Middle East during the 13th century B.C.E. called Moses.

According to the books of Exodus (1:8) and Deuteronomy (34:12), Moses was born in Egypt to Amram and Yocheved of the Hebrew tribe of Levi. After centuries of peaceful co-existence there after arriving in the days of Joseph, the Jews were enslaved by a new Pharaoh. Fearful of their natural increase, he decreed that all their firstborn sons should be killed.

Miriam hid her baby brother, Moses, in a basket in the bulrushes of the River Nile. He was discovered by an Egyptian princess and raised in the royal court. His spiritual awakening began after seeing a taskmaster hitting a Hebrew slave. Furious at this injustice, Moses killed him, fleeing to Midian (probably in western Arabia).

Moses noticed shepherds harassing the daughters of the priest, Jethro, and managed to repulse them. He worked for Jethro and married his daughter Tzipporah.

God spoke to Moses through a burning bush, and revealed Himself as Yahweh, protector of the Hebrews, lord of the earth and its people. This was the first of Moses’ personal face-to-face encounters with God.

God ordered Moses to liberate the Jews. Moses became scared, stammering that he was not fit for the job. God agreed that Moses’ brother, Aaron, would be his spokesman.

Back in Egypt, Moses demanded of Pharaoh, “Let my people go”. Pharaoh only increased the hardship of the slaves. Eventually, Pharaoh changed his mind after the Egyptians suffered ten plagues.

The Jews’ subsequent flight from Egypt and miraculous crossing of the Sea of Reeds (Yam Suf) is recorded in the Book of Exodus (Shemot) and is celebrated annually as Passover (Pesach). The events are repeated in the Haggadah, which is read during the symbolic Pesach meal called the Seder.

Moses acquired a new role of lawgiver. At Mount Sinai God presented him and the Jewish people with the Ten Commandments. After Moses ascended the mountain to learn with God and the Jews believed he would not return, the disconsolate Jews chose to worship a golden calf instead of God. Moses returned, found them worshipping the golden calf, and shocked them into stopping this behavour by smashing the Luchot haBrit (‘tablets of the covenant’ – the stone tablets on which the Ten Commandments had been carved).

Moses became chief adjudicator of God’s new Covenant with His people. The Book of Numbers (Ba-Midbar) tells of the Jews’ passage from Sinai to Transjordan.

The Moses narratives also relay how Moses struck a rock in anger (a sign of his human frailty); and how he conquered the Amorites and Bashanites. Finally, Moses surveyed the Promised Land (Canaan) from Mount Pisgah, but died before entering it.

‘Who was Moses?‘ by Discovery Channel (intriguing archaeological evidence about the historical accuracy of the story of Moses and the Exodus)