“Bind [these words] as a sign on your hand, and let them be an emblem in the centre of your head.” Devarim (Deuteronomy) 6:8

“You shall bind them as a sign upon your hand, and they should be for a reminder between your eyes.” (Deuteronomy 6:8) 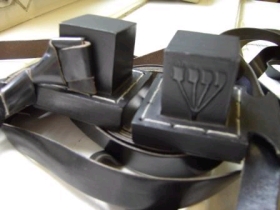 Each day, Jewish men bind tefillin to their head and heart. Tefillin, known in English as ‘phylacteries’, are leather boxes which contain four specific scriptural passages. The practice of binding or ‘laying’ tefillin is meant to elevate a man’s own consciousness and the whole material world to a higher level of spirituality.

Tefillin is one of the most important mitzvot (commandments) of the Torah. Tefillin serve as a remembrance of the exodus from Egypt, the most important event in Jewish history. They remind us that being freed from the bondage of Pharaoh’s slavery, the Jew is now bound to the laws of God.

The wearing of tefillin implies recognition of God, with Shaddai, one of God’s names, spelt out in the wrapping of the straps.  By wearing tefillin a person confirms their desire to worship God.

Tefillin must always be handled with due reverence. Should they accidentally fall to the floor, atonement is required by fasting or giving charity. A rabbi should be consulted as to how the atonement should be made.

Tefillin must be put on properly, with all steps carried out correctly so that the whole exercise is not invalidated. According to our sages, “He who carefully observes the commandment of Tefillin daily, merits long life and the World to Come.”

WHAT TEFILLIN ARE MADE FROM

The Hebrew letter shin is inscribed in the leather of the head tefillin on the right and left side. On the right, the shin is written with three strokes; on the left a highly unusual shin is made with four strokes.

Four sections of the Torah inscribed on parchment are contained in the two boxes. These passages are:

In the tefillin shel yad, these four passages are written on one long piece of parchment. In the shel rosh, each passage is written on a separate piece, each with its own compartment.

The straps of the tefillin are called retzuah/im. One long one is attached to the shel yad through thema’abarta and knotted specially around the arm, in the shape of the Hebrew letter yud. It is also in the form of a noose so that it can be tightened on the arm. Another circular strap is connected to the shel rosh, forming a circle that can be adjusted according to the head size, and knotted in the shape of a doubled letter dalet.

HOW AND WHEN TEFILLIN ARE USED

Tefillin are one of the three otot, signs of God’s covenant with Israel, the other two being circumcision and the Sabbath. They are used on week days (Sunday through Friday). Tefillin are worn during the morning prayers. Tefillin may still be put on later in the day (but not after sunset) if for some reason it was impossible to do so in the morning.

Tefillin are not worn on the Sabbath and certain festivals when there is no need for an additional sign (the Sabbath or festival itself is regarded as already being an additional sign in its own right). They are also not worn by the mourners before a funeral, or by a groom on his wedding day, as they are seen as signs of adornment. Tefillin are not put on for the morning prayer on Tisha B’Av, but are put on for the afternoon prayer. On intermediate days of festivals, Ashkenazi Jews in the Diaspora (outside Israel) wear tefillin, while Sephardi and Chassidic Jews, adhering to the kabbalistic tradition stated in the Zohar, do not. In Israel, virtually no one wears tefillin on the intermediate days of a festival.

The person should be standing. Taking out the hand tefillin first, place it upon the biceps of the left arm, and adjust so it rests against the heart. Take care so that the leather loop through which the strap is drawn is above the box. Recite the blessing “L’ha-niach tefillin” before tightening the strap and then fasten it, winding the two coils over the leather extension and the arm to form the letter shin.  Make seven coils up the forearm then wind the rest of the strap around the palm.

Then immediately take out the head tefillin and place it on the head so the box rests above the forehead and the knot rests just above the neck. Take care that the lower edge of the box does not fall below the hair roots, and that it is centered at a point midway between the eyes.

The straps of both the hand and head tefillin must always be placed black side up. The straps of the tefillin should hang below the waist.

It is prohibited to interrupt this procedure by conversation or gesture. The only permitted interruption is to answer “Amen” when hearing someone else making the blessing over tefillin.

A left-handed person puts the hand tefillin on his right arm.

In laying tefillin, attention is directed to the head, heart and hand. This reminds us to dedicate ourselves to the service of God in all that we think, feel and do. Unity of mind and heart, intellect and emotion is attained by the individual through the mitzvah of tefillin. Tefillin also remind us of God’s love, wisdom and protection. In further recognition of this it is customary, when putting on tefillin, to say, ”You open Your hand and satisfy every living thing with favour.”

Stand up. First unwind the strap around the middle finger and rewind it around the palm. Remove the head tefillin with the left hand, and rewind its straps before placing them back in the tefillin bag.

According to halachah (Jewish Law), women are exempt from the commandment of donning tefillin. The notion of this exemption came about during the Tanaitic period. The Mishnah (Oral Law) states: “Women, slaves, and minors are exempt from the recitation of Shema, and from tefillin, and are obligated in prayer, mezuzah and Grace After Meals.” (Berakhot 3:3).

While women are not required to observe time-bound commandments, they are not prohibited from fulfilling them. For instance, the Gemara (Babylonian Talmud Eruvin 96a-b) includes a discussion as to whether or not women can perform the commandments from which they are exempt. The discourse relates that Michal, the daughter of King Saul, wore tefillin and the sages of her time did not protest. Apparently, the learned daughters of Rashi, the medieval commentator, also wore tefillin, and so did other especially devout and learned women throughout Jewish history.

The medieval source, Sefer HaChinukh (Positive Commandment 421), explicitly states that although it is not the custom for women to wear tefillin, if they do decide to wear them there will not be a protest, and they will receive a reward.

Opposed to this view were the medieval Talmudic commentators known as the  Tosafists. They stated that Jewish women do not wear tefillin because “tefillin require a guf naki (clean body) and women are not meticulous enough to be careful [in that regard].” (Eruvin 96a)

The Rema, Rabbi Moshe Isserles, claimed that Jews should protest the wearing of tefillin by women (Orach Hayyim 38:3). The Mishnah Berurah, written by Israel Meir HaCohen (Hafetz Hayyim) in 19th-century Lithuania, alludes to the Tosafist statement pertaining to tefillin and cleanliness.

The Magen Avraham asserted that because women are not obligated to fulfill the commandment of tefillin, they may not be as careful as men are regarding proper cleanliness during its performance (Orach Hayyim 38:3). However, others argue that because they perform the mitzvah voluntarily and very consciously, women would probably be even more meticulous in its observance than men.

The bottom line is that Jewish law allows women to perform the mitzvah of tefillin, and today more and more women are doing so although this practice is almost entirely confined to Reform and Conservative congregations.

Being Jewish: The Mitzvah of Tefillin

Chabad: What are Tefillin? (with links to further pages related to tefillin)