“You shall make for yourselves twisted threads on the four corners of your garment with which you cover yourself.”Dvarim (Deuteronomy) 22:12

Any four-cornered garment which has tzitzit (ritual fringes) on it, is considered a tallit. There are two kinds of tallit:

The large tallit worn during prayers is the Tallit Gadol. It needs to be large enough to cover most of the wearer’s body. The average size of a tallit is six feet by four feet, enabling one to feel completely enwrapped by it. Its size also distinguishes it from a common scarf.

There are different customs about wearing a tallit gadol in Ashkenazi communities, but it is usually only worn by married men. Is Sephardi communities, all men above the age of bar mitzvah (not just married men) wear a tallit gadol. In both Conservative and Reform synagogues the tallit is worn by all men past Bar Mitzvah age, and by some women.

Men and boys almost always wear the small tallit called a Tallit Katan, usually under the clothing. It should be at least 16 x 16 inches in the front and in the back. It is usually simply referred as tzitzit.

Men wear tzitzit at all times (except when sleeping, showering or bathing) to take advantage of any opportunity to do a mitzvah,even though, strictly speaking, the Torah does not require us to wear tzitzit unless we are wearing a garment with four or more corners.

WHAT TALLITOT ARE MADE FROM

The tallit was traditionally made from either linen or wool, but it is now acceptable to wear silk. The rule of shatnez (the biblical prohibition against the mixing of certain species), forbids one to wear a tallit made from both linen and wool. Silk, however, can be mixed with anything.

All tallitot should ideally be made from wool, but it is not essential. A tallit gadol is mostly made of wool. A tallit katan is frequently made from cotton so that it will be more comfortable. (Synthetic materials should not be used to make a tallit as they may not bear any mitzvah of tzitzit.)

The strings which are used to make the tzitzit, must be made especially for the mitzvah of tzitzit, and must have rabbinical certification.

The Torah instructs us to insert a blue thread into each corner of the tallit. This particular blue, known astechailis, can only be obtained from an animal known as the Chilazon (probably a kind of ancient sea snail). Since the exact identity of this animal is no longer known, we are unable to perform this part of themitzvah of tzitzit. However tzitzit which do not contain the blue thread are still perfectly valid.

There are two basic symbolic aspects of tallit:

1.      Adding together the eight strings and five knots on each corner and the numerical value of the word tzitzit (which is 600), we reach the sum of 613, which is the total number of mitzvot in the Torah.

The tallit is a physical symbol of God’s protection and provision, and a spiritual expression of the enwrapping of God’s laws around oneself.

HOW AND WHEN TALLITOT ARE WORN 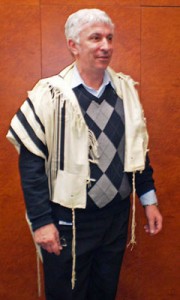 All men wear the tallit at specific times: during the Shacharit (morning) and Musaf (additional) services and during Shabbat and other holy days. The leader of the Minchah (afternoon service) and sometimes the leader of the Maariv (evening service) also wear tallitot (the plural form of ‘tallit’). The tallit is also used for the recital of the Shema. During the prayer, the tzitzit are gathered and held around one finger. This signifies the coming together of the four corners of the earth. Like the Shema prayer itelf, this action is also an expression of God’s oneness.

Women are not obligated to wear a tallit and traditionally they do not do so; yet it is not forbidden and many women in Reform congregations do so.

It is customary to put the tallit on before the tefillin (ritual objects worn by men on the arm and head). The tallit is worn more regularly than the tefillin, and the regular act is usually performed first. This also highlights that the mitzvah (commandment) of tzitzit (wearing a fringed prayer shawl) is equivalent to all the mitzvot put together. Immediately before the tallit is put on, it is held open and spread out as a blessing is said.

Before the tallit is used, all its tzitzit must be thoroughly checked to ensure that they are intact. Psalms 104:1-2 are recited, followed by a meditation (kavanah), drawn from Kabbalistic tradition (Jewish mysticism), which further emphasises the importance of the ritual.

The tallit is then wrapped around and behind the wearer. Before it is left to rest on the shoulders, the tallit covers the head so that one feels completely enclosed, sheltered and protected. At this point a meditation is said: “How precious is your kindness, God. Man can take refuge in the shadow of Your wings.”

When reciting the third paragraph of the Shema, it is customary to kiss the tzitzit each of the three times they are mentioned. When the leader reads the final words, the tzitzit are kissed for a fourth time. The tzitzit should not be dropped until Ezrat Avotainu (a description of the drowning of the Egyptians) is said. The dropping emphasizes the reality of the divided world.