Of all the retail empires in Britain founded by Jews, none has endeared itself quite so much to the Anglo-Jewish community as Marks & Spencer. In 1997 Marks & Spencer was rated as the fourth most profitable retailer in the world. The firm’s profits topped £1 billion, increasing every year from 1968 to 1998. Despite its success, its origins were considerably more humble.

In 1864 Michael Marks, a Yiddish-speaking Jewish refugee from the Russian Pale, set up a market store in Leeds, North England. Soon he was running a chain of open-air stores under the logo: ‘Don’t ask the price – it’s a penny’.

In 1916 Michael Marks’ son, Simon, became company chairman. He soon appointed his schoolboy friend and fellow Jew, Israel Sieff, as company director. Their lifelong partnership personified the firm’s close ‘family atmosphere’. In fact, each of them married the other’s sister!

In 1928 Marks & Spencer introduced the St Michael label for quality. (It was something of a cheeky joke: St Michael referred to Simon’s father, but is also the patron saint of Jews in Christian folklore). Marks & Spencer branched out into food and clothes, and acquired a major presence in London. After World War II it opened stores outside Britain. Marks & Spencer also won a reputation for fair treatment of staff, with handsome bonus packages and what some dubbed a mini-welfare state. 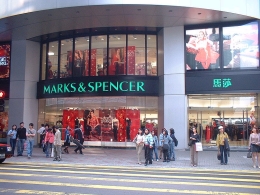 Simon Marks and Israel Sieff played a major role in early Zionism. In a virtual coup they ousted the anti-Zionist stalwarts of the British Jews’ Board of Deputies. Acolytes of Chaim Weizmann, they set up the Palestine Office in London, which propelled the passage of the 1917 Balfour Declaration (statement of British support for a Jewish state).

Israel’s wife Rebecca Sieff, co-founded WIZO (the Women’s International Zionist Organisation) in 1920, and helped to run it for 20 years. In 1934 the Marks and Sieff families set up the Daniel Sieff scientific research institute in Rehovot, which in 1948 was incorporated into Israel’s renowned Weizmann Institute. In 1999 M&S bought $233 million worth of goods from Israel.

In the late 1990s Marks & Spencer’s fortunes suddenly began to slide. Critics accused the firm of resting on their laurels and lacking the innovation of the past. Today Jewish and family influence in Marks & Spencer is much less dominant, especially after the retirement of Israel’s son, Marcus Sieff (now Lord Sieff of Brimpton).

Marks & Spencer’s Jewish provenance seems to be ending and it has moved from having an English to a more global identity. Even so, it remains a source of pride to UK Jews, and inspiration for other ethnic minorities in Britain who hope to emulate its remarkable success.