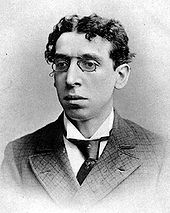 Hailed as the greatest writer of Anglo-Jewry, Israel Zangwill was also a leading Zionist pioneer. His life was full of contradictions: despite his close links with Theodor Herzl, he led a movement that broke away from Zionism. He delighted in translating traditional Jewish liturgy into English, even though he was a dedicated secularist. During his lifetime he was called ‘the Jewish Dickens’.

Zangwill was born on February 14th 1864, in London, the second of five children to a poor Latvian-born father and Polish-born mother. He spent his early childhood in Bristol, west England, then showed early literary promise as a pupil at the Jews’ Free School (JFS) in London’s East End.

Zangwill rejected what he called the superstitions of religious life, but was fiercely proud of his Jewish identity. His scathing sketches in the “Jewish Chronicle” and literary journals marked him as a critic of the Anglo-Jewish establishment.

To earn a living, Zangwill taught at the JFS. By night he studied for a degree at University College, London. Soon he became a friend of writers such as George Bernard Shaw, who was a political radical like himself. He championed socialism and women’s suffrage and loved Yiddish (though he never wrote in the language).

Some 150,000 Jews poured into Britain between 1881 and 1914. Zangwill’s classic novelistic memoir, Children of the Ghetto (1882), introduced their culture, lives and aspirations to English readers in the UK and USA.

Zangwill went on to write many books with ghetto in the title. Some were fictional; others described great Jews of the past – invariably rebels, like he. His second most popular book was the comic novella, King of the Schnorrers (1894). It cleverly used the story of an 18th century Sephardi beggar, penniless yet still snobbish, to throw light on the contemporary Anglo-Jewish desire to be accepted by general society, and to pillory their values.

In 1895 Zangwill met Theodor Herzl in London, introducing him to Anglo-Jewish leaders. He accompanied Herzl to Palestine and became an ardent Zionist. Ten years later Zangwill led the territorialist movement (known as the ITO) out of the Zionist Congress. The ITO sought to found a Jewish homeland anywhere – not necessarily only in Palestine. It disbanded in the mid-1920s.

Zangwill vacillated between advocating assimilation and Jewish self-assertion. His 1908 play, “The Melting Pot”, did especially well in the United States, introducing this important phrase into 20th century English language.

Zangwill helped found a group of like-minded Anglo-Jewish intellectuals, called the ‘Wanderers of Kilburn’. Apart from his novels, essays and sketches, he also wrote many light-hearted plays and innovative detective novels. He even translated Hebrew liturgy into English. He was happily married to an upper-class English gentile woman. In later life, Zangwill indulged in ill-judged theatrical ventures and he died penniless in 1926.

Israel Zangwill fell out of favour with 20th century readers and his territorialist beliefs proved to be a blind alley. Yet as contemporary Anglo-Jews rediscover the charms of the old East End and explore their identity in 21st century Britain, Zangwill is enjoying a real revival.