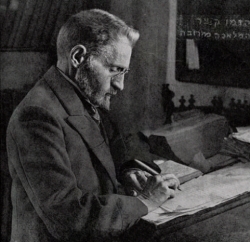 Hebrew is the national language of the Jewish people. However, in the first century C.E, it largely fell out of everyday use. Eliezer Ben-Yehuda revived Hebrew as a language, thus ensuring its pivotal role in modern Israel.

Eliezer Ben Yehuda (1858-1922) was born Eliezer Perelman into a Hassidic Jewish family in Luzhky, Lithuania. At the time European Maskilim (followers of the Jewish Enlightenment) were reviving Hebrew as a literary language. Abraham Mapu wrote the first Hebrew novel in 1853; the first Hebrew newspaper appeared in Prussia in 1856.

Spoken Hebrew was lacking, used only occasionally as an ad hoc lingua franca between Jews of different origins. In 1879 Ben-Yehuda wrote a powerful article in the journal Ha-Shahar. This was the first time someone attached the revival of a vernacular Hebrew to the creation of a Jewish spiritual centre in Israel.

Ben-Yehuda advocated Sephardic pronunciation over Ashkenazic and Yemenite accents. He reluctantly accepted the Mishnaic (text of oral law) form of grammar, over a biblical form.

A linguistic purist, Ben-Yehuda insisted that Modern Hebrew should create new words (neologisms) based on ancient Hebrew, Aramaic and, where necessary, Arabic. In other words, he suggested that it should stick to a strictly Semitic structure.

Ben Yehuda broke off his medical studies in Paris, married Deborah Jonas (d.1891) in Cairo, and in 1881 arrived in Jaffa, which was, then in Ottoman Palestine. Eliezer then taught and wrote in Jerusalem. He demanded that Deborah speak to him only in Hebrew. Their son, Ben Zion (later known by his pen-name, Itamar Ben-Avi), became the first modern all-Hebrew-speaking child. Even their dog had to obey orders in Hebrew!

In 1884 Ben-Yehuda founded a weekly newspaper called Ha-Zevi. Five years later, he began compiling his Complete Dictionary of Ancient and Modern Hebrew. Work stopped for a year in 1894, as he languished in prison on false charges of treason. The first volume of the opus appeared in 1908, however the full work was only completed in 1958.

Ben-Yehuda’s battle to have Hebrew accepted as the language of the Jewish people stirred up huge opposition. Theodor Herzl felt Hebrew was unfeasible and preferred German. Other Zionists advocated Yiddish. Orthodox Jews insisted that Hebrew was lashon kodesh (a holy language) and rejected its use in secular society (many extremists still adhere to this view). Palestine’s ruling Turks, feared Hebrew’s political impact. Ben-Yehuda and his allies won a great victory in 1913, when the Haifa Technion (university) accepted Hebrew as its language of instruction.

Ben-Yehuda died in 1922. That same year, the British Mandate authority (an office of colonial power), declared Hebrew one of Palestine’s three official languages alongside English and Arabic.

Theodor Herzl wanted Jews to create a normal state in Palestine. Yet did he ever imagine an Israel where people argue, court and even dream in Hebrew? The revival of Hebrew may be Israel’s most exceptional achievement.