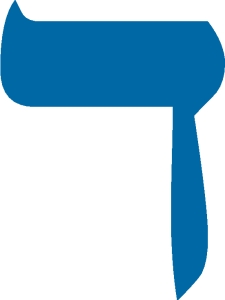 The letter DALET is the fourth in the Hebrew alphabet. It is equivalent to the number four and is said to symbolise selflessness.

The First commandment of the Torah is “Be fruitful and multiply.” In order to do so, one must give birth to at least two children, implementing the foursome of mother, father, daughter and son. This is the primary revelation of the significance of the number four in Judaism.

The DALET is symbolic of the poor man (the dal), who is chased by the letter gimmel, which represents acts of kindness. Together, the two letters form the mitzvah (commandment) of gimol delim, being kind to the needy.

As the Hebrew word for door (‘delet’), is derived from DALET the letter gimmel is portrayed as knocking on the door of the poor man.

Metaphysically, the number four alludes to the Four Worlds as explained in Kabbalah (Jewish mysticism). These are comprised of Atzilut (Emanation), Beriah (Creation), Yetzirah (Formation), and Asiyah (Action). These Four Worlds are said to describe the creation of the universe respectively, as descending stages of holiness, beginning with the stage that is closest to God and beyond human comprehension, and ending with the realm of tangible reality.

The Name of God is referred to as ‘the Name of four letters’, each letter signifying a different stage of the process of creation. There are also four levels of Torah interpretation: the literal, the allusion, the allegory and the secret. It is said that the relevance and significance of the number four in the Torah in general is in direct correspondence with the four letters in God’s Name.

The DALET is considered to be a gateway to the physical and metaphysical worlds that shape our existence.