The flag of the new State of Israel was first flown at the United Nations in 1949. The sight of the Israeli flag, symbolic of the Jewish return to their Promised Land, filled the hearts of Jews everywhere with pride and joy.

The flag’s two blue horizontal stripes remind us of the tallit (prayer shawl) in which Jewish men wrap themselves when they pray. This reminds us of the faith and prayers of the many generations of Jews who continually longed for their homeland.

The Shield of David (Magen David) between the stripes is a traditional symbol of Judaism. It comprises two triangles: one pointing up towards all that is spiritual and holy, and the other pointing down towards all that is eartghly and secular. The Jews of of the State of Israel thus symbolically strive to bring together the spiritual and earthly worlds, the holy and secular.

The Magen David (Shield or Star of David)

It is said that David, a great King of Israel, adorned his shield with this symbol, which is where it got its name. The six points of the star symbolize God’s rule over the universe in all six directions: north, south, east, west, up and down.

Originally, the Hebrew name Magen David poetically referred to God. It acknowledges that our military hero, King David, did not win by his own might, but by the support of the Almighty. 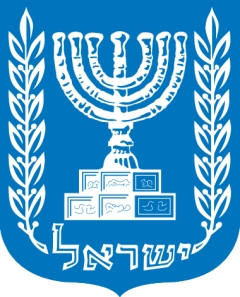 The emblem of the State of Israel tells the story of the country’s history, people and land. It shows the Menorah from the Holy Jewish Temple of Jerusalem, an ancient symbol of the Jewish people, with olive branches surrounding it.

It reminds us of the journey of the Jewish people from exile after the destruction of the Temple in Jerusalem, to return in modern times with the reestablishment of the State of Israel almost 2,000 years later.

Symbolically, the Menorah, removed from the Temple about 1900 years ago and paraded triumphantly through Rome, has returned to Jerusalem and Israel, restored to its former glory.

The olive branches also refer to the restoration of the glory of the State of Israel, since they provided a neverending supply of oil for the Menorah according to the prophet Zechariah’s vision. Olive branches also symbolise peace, as after the Flood a dove brought one to Noah to show that the floodwaters were receding and peace would return. The desire for peace is a very strong principle of the State of Israel.

The Menorah originated as a seven-branched candelabrum carried by the Israelites through the Sinai desert. It is today the emblem of the State of Israel.

When Moses received the Torah on Mt Sinai, God showed him the prototype of the Menorah. Carved from one solid piece of gold, it had a central shaft and six branches, curved upwards, making seven branches altogether.

“Make a menorah out of pure gold. The menorah should be formed by hammering it. Its base, stem and cups, spheres and flowers must be hammered out of a [single piece of gold]. Six branches shall extend from its sides, three branches on one side of the menorah, and three branches on the other side…”  Shemot (Exodus) 25:31-40

Following these instructions, the Menorah for the Holy Jewish Temple in Jerusalem was made of pure gold, with seven straight branches and three feet. The number seven is significant in Judaism, so the seven branches were meaningfully chosen. They represent the six days of creation and the seventh day, the Sabbath, the day of rest. Thus the number of branches on the menorah serves as a constant reminder of our creator, God, and the importance of the Sabbath.

Three upside down cups were on each branch, and near the base was another cup, bringing the total to 22 cups. This is exactly equal to the number of letters in the Aleph Bet (the Hebrew alphabet). The 9 flowers decorating the menorah symbolised the world’s potential for growth and development, and the 11 egg-shaped bulbs represented limitless spiritual pleasure.

The High Priest (Kohen Gadol) of the Temple lit the Menorah every day as evening approached. All the flames of the Menorah faced the central lamp. As this lamp faced the Holy of Holies, it was called the ner ma’aravi, the western lamp. This lamp would burn miraculously long after the others had burned out, until it was time to rekindle the Menorah the next day, even though it was the first one kindled each time. This was seen as a sign to the world that God dwelt with the Jewish people.

The Menorah was used to illuminate manuscripts during the Middle Ages, and Kabbalists (Jewish mystics) took it as a representation of the sefirot (emanations of God). Today the Menorah is a familiar symbol, appearing among other places on Marc Chagall’s stained glass windows in Jerusalem, at the Ghetto memorial in Warsaw, and outside the Knesset building in Jerusalem.

The Jewish people’s yearning for return to their homeland was given musical form in HaTikvah, the national anthem in 1948, with the declaration of the State of Israel.

The name ‘HaTikvah’ means ‘the hope’ and anthem symbolises the undying hope of the Jewish people through their long years of exile, that they would one day return with God’s help, to their independent homeland.

HaTikvah was written in 1878 by a Galician Jew called Naftali Herz Imber, who later settled in America. When singing the HaTikvah, Jews are promising ourselves and our people that we will never forget the undying hope for our homeland that has lasted over so many thousands of years.