Rosh HaShanah begins a period of time known as the Ten Days of Repentance or the Days of Awe. These are serious days and the prayers we recite on them focus on repentance and forgiveness. We pray to God for peace, health and happiness. Rosh HaShanah is the only festival observed for two days both in Israel and the Diaspora (outside Israel).

Hallel (joyful psalms of praise to God) are not said on Rosh HaShanah – it is felt inappropriate to say Hallel during the Days of Awe when we are very conscious that God is sitting in judgment over us.

We read our prayers at this time from a special prayer book called a Machzor. “The Kingship of God” is the dominant theme of the Rosh HaShanah Machzor. It includes selections chosen from the Bible, Talmud, Midrash and medieval Jewish literature, and is as relevant today as when first written.

In the Amidah and Kiddush for Rosh HaShanah, we say the phrase “Yom Teruah” (‘the day of blowing’). However, if Rosh HaShanah falls on Shabbat (when it is not permitted to blow the shofar), we say “Zichron Teruah” (‘remembering blowing’) instead. (If you mistakenly say the wrong phrase, you need not repeat the prayer.)

Selichot are special prayers which introduce the High Holy Days and are recited from midnight on the Sunday morning prior to Rosh HaShanah. They are repeated every day until Rosh HaShanah (or for at least three days). During this period, Jewish men rise at midnight to supplicate and plead for their lives before God, sitting on His Throne of Judgement, writing the Book of Life for the coming year. These days are set aside for us to examine all our sins and return to God.

The evening service consists of the Half-Kaddish, the Shema, the Amidah and the concluding prayers.

From Genesis 21 we read about Isaac’s birth and his growth to manhood; Abraham’s banishment of Ishmael; and Abraham’s peace treaty with Abimelech. This portion is chosen for Rosh HaShanah because Isaac was born on Rosh HaShanah. Also, this portion relating to the birth of Isaac is read the day before the binding of Isaac, which is one of the major themes of this festival. The Maftir on both days is from Numbers (29: 1-6) and describes the special offerings of the day. References to the New Moon offerings are made as Rosh HaShanah is also the New Moon festival.

The Haftarah (reading from the Prophets) on the first day of Rosh HaShanah is from the first part of the Book of Samuel. It describes Hannah’s passionate plea for the gift of a child, and her triumph and joy when her prayer is answered. The connection is both because Hannah’s prayer was heard on Rosh HaShanah, and it links to the birth of Isaac in the Torah portion.

Genesis (22: 1-24) is read on the second day. It deals mainly with the binding of Isaac. Abraham obeys the voice of God and offers Isaac as a sacrifice; Isaac willingly complies. An angel prevents the sacrifice from being completed, and God promises Abraham that because of his obedience, his seed will be blessed and be a blessing to mankind.

The second day’s Haftarah is from the Book of Jeremiah. It has the motif of motherly love with Rachel weeping for her exiled children. However, she is assured by God that they will be restored to the land of their fathers.

Highlights of the Liturgy on First and Second Day Rosh HaShanah include:

Supposedly written by Rabbi Amnon of Mainz as he was about to die, Unetaneh Tokef means ‘Let us proclaim the sacred power of this day’.  This is one of  Rosh HaShanah’s most important prayers. It discusses the themes of this Day of Judgement, saying that God will decide who will live and who will die, and concludes with the well-known phrase, “But penitence, prayer and charity avert the evil decree.”

Avinu Malkenu (‘Our Father, Our King’)

This prayer speaks to God as a loving but stern parent who has control over our lives.

It is said at the end of Shacharit (Morning Service) and Minchah (Afternoon Service). Avinu Malkeinu is not said on Shabbat. 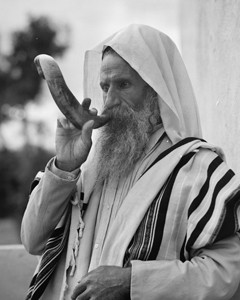 Musaf is the Additional Service said on Shabbat and holydays after Shacharit (Morning Service). On Rosh HaShanah the Musaf prayers are the longest in the year. Musaf is divided into three parts: Malchuyot, Zichronot and Shofarot.

These are prayers recited during the Shofar service, implying the acceptance of God’s kingship (Malchuyot), a plea for Divine providence by remembering the merits of our ancestors (Zichronot), and the hope that life and peace will descend upon the entire world as proclaimed by the shofar (Shofarot).

During the Musaf service we do something we normally do not do – we bow down to the ground or kneel during the repetition of the beautiful prayer Aleinu Leshabeach (“It is our duty to praise the Master of all”). We make this exception on Rosh HaShanah and Yom Kippur, but normally we do not bow as we do not want to be seen to worship anything or anyone other than God.

Many of the loveliest tunes are included in the repetition of the Amidah during Musaf.

It is customary to perform the duty of the Priestly Blessing during the Musaf service on festival days. The priests (kohanim) are direct descendants of Aaron, the High Priest. They are commanded to bless the Jewish people with a three-fold blessing. During this blessing, we should not gaze at the priests directly as the Divine Presence rests upon them. It is customary for men to cover their eyes with their prayer shawls, and for women to gaze into their prayer books.

The afternoon service consists of the opening prayers, the silent Amidah, the repetition of the Amidah, the recital of Avinu Malkenu (“Our Father, Our King”), concluding prayer, and the Tashlich prayer. If Rosh HaShanah falls on Shabbat, the Torah is read.

The video below is of the Kohanim – priests – reciting the Birkat Kohanim (Priestly Blessing) at the Kotel (Western Wall) in Jerusalem on Rosh HaShanah. Note that the Kohanim first say a blessing thanking God for giving them the responsibility to bless the people before they then proceed to bless the people)