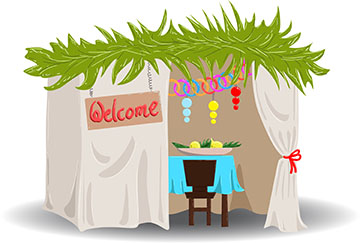 ‘Sukkah’ is the Hebrew word for ‘booth’ or ‘tabernacle’. ‘Sukkot’, the plural, is the name of the festival of booths. Sukkot were the huts in which the Jewish people lived during their years in the desert after they left slavery in Egypt and before they arrived in the Promised Land (Israel).

Sukkot comes at the end of the High Holydays (Rosh HaShanah and Yom Kippur), which are the most serious days of the Jewish year. Sukkot is a joyful festival and one of the Three Pilgrim Festivals.

THE STORY OF SUKKOT

During Sukkot we remember when God freed us from slavery in Egypt. After our ancestors left Egypt, they wandered for forty years in the desert before they reached the Promised Land of Israel. Along their way during these forty years, they built temporary homes out of dry palms and branches.

To remind us of their journey and these temporary homes, and of how our ancestors relied on God to help them, on Sukkot we ‘live’ for seven days in huts made from branches and palms.

Sukkot was also an autumn harvest festival, celebrated at the time when the Jewish people gathered the crops from the fields and the fruits of the orchards.

These harvests were always celebrated with great excitement. As a result, we also call Sukkot ‘Chag HaAsif’ (‘The Festival of Gathering’) and ‘Zman Simchatenu’ (‘The Time of Our Happiness’).

HOW DO WE CELEBRATE SUKKOT?

It is traditional to start building a sukkah to use during the holiday of Sukkot straight after Yom Kippur so that it will be ready in time.

A sukkah must have at least three walls. The walls of the sukkah can be made out of anything: canvas, wood, bricks, even metal or stone. They may even be a permanent structure, such as the side wall of a house.

There are, however, certain rules about the roof of a sukkah:

Living in a Sukkah

We are commanded to ‘live’ in a sukkah for the whole week of Sukkot. This means that we should try to eat all our meals in the sukkah and say the blessings for bread, wine, and a prayer that thanks God for Sukkot. Some people, especially men, also sleep in the sukkah at night time.

During Sukkot, it is a great (and very enjoyable) mitzvah to invite guests over to eat with you in your sukkah. We also imagine that seven special guests, known as the Ushpizin, join us in the sukkah. These guests are the Biblical characters Abraham, Isaac, Jacob, Joseph, Moses, Aaron and David.

On Sukkot we use four kinds of plants known in Hebrew as the Arbah Minim (literally, the ‘four species’.). They represent the oneness of Israel, and the harvest. They are:

Aravot – willows that have no fruit and no fragrance

Etrog – citron, a fruit like a lemon, that has a sweet fragrance and can be eaten

Hadassim – myrtles, that have a nice smell but cannot be eaten

The three myrtle twigs and the two willows are tied together to the palm branch. This bouquet is called the lulav.

During the morning service in synagogue, we say Hallel prayers. There is a procession with the lulav and the etrog.

The seventh day of Sukkot is called ‘Hoshanah Rabah’, which means ‘the great help’. It is called this after one of the prayers we say on the day.

The night before Hoshana Rabah people spend their time praying and studying. This is because Hoshana Rabbah is believed to be the very final opportunity for God to make a favourable judgment about what will happen to us during the coming year.

On the day of Hoshanah Rabah in the synagogue we walk around the bimah in a procession, carrying the lulav and etrog. While walking, we say prayers for a good harvest. Seven circuits are made, and then we bind together five aravot (bundles of willow twigs) and beat them on the ground whilst saying a special prayer.