Keeping the laws of kashrut is one of the most important things a Jewish person can do. The Hebrew word ‘kasher’ means ‘fit or proper’. It means that a food or drink is permitted and acceptable to be eaten or drunk according to Jewish law.

Laws about foods are so important that one of the first commandments ever given to human beings concerned food: Adam and Eve were told not to eat the fruit of the Tree of Life.

The Torah says that we are only allowed to meat from certain animals and there are very strict laws concerning how the animal should be killed and what happens afterwards.

As for red meat, the animals must have cloven hooves and chew their cud. These are animals like goats, sheep, cattle and deer.

We are not allowed to eat certain parts of the animal once it has been killed. These parts are:

Kosher meat and poultry (chicken, turkey, duck, etc.) must be prepared by the method of shechita – a quick cut by a super-sharp knife – which Jews believe to be the most painless means of killing the animal.

The man who performs the shechita is called a shochet. In Israel, as well as the shochet, there is another person who is responsible for removing the fat (chelev) and the gid hanashe. Both the shochet and this person work under the supervision of a special rabbi who ensures that they carefully comply with what Jewish law requires.

After shechita, the animal must be checked very carefully (bedika) to make sure it doesn’t have any damage which according to Jewish law would make it unkosher.

The meat must next be washed in water to remove all the blood, then it must be soaked in lukewarm water for half an hour. After soaking for half an hour, the meat should be washed carefully and allowed to dry for a little while, but not completely or the salt will stick to it. The meat is now salted on six sides (top, bottom and four sides) for an hour on a sloped board so that the blood can drain off into a sink or container. After an hour, we rinse the meat three times to remove the salt and blood.

Why Aren’t We Allowed to Eat Blood?

WHY DON’T WE MIX MEAT AND MILK? 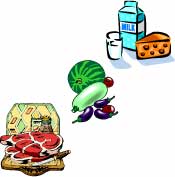 The laws concerning milk and meat are very strict and are written in the Torah. People who keep kosher are very strict when it comes to this rule. They have separate dishes, cutlery and other cooking utensils, separate sinks and tablecloths. (Some people even check their pets’ food to see if it has any mixing of meat and milk).

Food that does not have any meat or milk in it is called ‘pareve’. This means that the food can be eaten with either  a meat or a milk meal. Examples include salad and drinks. Salad bowls and drinking glasses can be used with both meat and milk dishes. 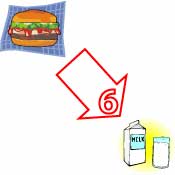 After eating meat, we have to wait a certain amount of time until we are allowed to eat foods containing milk. Most Australian rabbis say that we should wait about six hours for the meat to digest before we eat milk products. In some other countries people wait less than six hours.

When we eat milk products, they are digested much faster than meat products, so we don’t need to wait very long. The custom is to wait for half an hour after eating milk to eat meat. We are also told to rinse out our mouths with a pareve drink (such as water) before eating dairy.

Another rule of kashrut is not to eat fish and meat together, but for a different reason to that of meat and milk. It is simply that the rabbis in ancient times believed it would be harmful to the body to eat the two together.

WHICH FOODS ARE KOSHER?

In the Torah there is a long list of birds we are not allowed to eat. They are: eagle, ossifrage, osprey, kite, vultures, bats, storks, ibis, ravens, pelicans, swans, herons, magpies and hoopoes. This has resulted in a general rule – birds of prey (birds which eat other animals) are not kosher.

There are certain rules about which fish are kosher. There is one important rule to remember: a fish is kosher if it has both fins and scales. If the scales of a fish are very hard to remove, then the fish is not kosher. Examples of non-kosher fish are all shellfish, eels, shark, monkfish and catfish. Fresh or frozen fish should be bought with the skin on so that we can check if it is kosher or not.

Only milk that comes from kosher species of animals (such as cows and goats) is kosher. Milk should be supervised from the time it is milked until it is bottled in order to make sure that it comes from a kosher animal. However, in countries where there are government authorities which guarantee the safety of milk that is sold, some Kashrut bodies rule that all milk can be considered Kosher. Milk that comes from an unkosher animal is not kosher.Chalav Yisrael (very strictly ‘kosher milk’) is now available in most big cities where Jewish people live.

The rules get stricter when dealing with cheeses. All cheese has to be certified by rabbis. This is because one of its ingredients, called rennet, often comes from an animal, usually a calf’s stomach. The rabbis of the Talmud ruled that all kosher cheese production must be supervised to ensure the rennet used does not come from an animal source.

Wine and grape juice must also be supervised by rabbis to make sure that they were made by Jewish people. The reason for this goes back to Roman times, when the rabbis were worried that Jews were mixing too much with non-Jewish people.

In order to prevent Jews eating and spending too much time with non-Jews, the rabbis made the rule that they were not allowed to drink wine made by non-Jews. That way they thought they would prevent intermarriage.

Another, modern reason for this rule is that today non-kosher ingredients often appear in non-Jewish wines, such as bull’s blood for colouring. Since blood is not kosher, it is another reason to only drink only Jewish-made wine.

All fruits and vegetables are kosher, but the insects which may be found in them are not. Before cooking or eating, all fruit and vegetables should be checked to make sure they do not contain insects.

We are discouraged by the rabbis from eating bread that has not been manufactured by someone Jewish. However, it may be difficult to obtain bread of this nature, therefore, we are allowed to eat commercially produced bread if we are certain that it does not contain non-kosher ingredients and was not baked in an oven also used for non-kosher foods. This can be a problem as bread pans are frequently wiped with fat to prevent sticking, and animal fats are often used as they are the most inexpensive to buy.

Many biscuits or cakes are baked in ovens used to bake non-kosher products. Also, the butter or margarine used to bake these items may not be kosher either. The fat used to grease the tins or trays may also not be kosher as it may come from animals. There is no sure way of knowing, unless you buy biscuits or cakes which have been certified as kosher.

These contain fats and other ingredients which often come from animals. Only margarine supervised by rabbis can be used by people who keep strictly kosher.

Today many products carry a kosher label, like the KA (NSW Kashrut Authority logo introduced a few years ago). To get a kosher label, every ingredient in every product has to go through a strict inspection to decide whether or not it contains non-kosher substances.

Many ‘health’ foods are natural but nevertheless non-kosher.Even if a product is sold in a natural or health food store, it requires checking by a rabbi. This includes items such as vitamins.

For the traveller in Australia, kosher products can be found in certain areas of the main cities of Sydney and Melbourne.

When travelling by plane, train or ship, kosher meals can be ordered in advance.

About.com: How to Make Your Kitchen Kosher