WHAT IS SHAVUOT AND WHEN DO WE CELEBRATE IT?

Shavuot is the second of the three Pilgrim Festivals. It is celebrated for 2 days outside Israel and for 1 day in Israel. The name ‘Shavuot’ means ‘weeks’ because it falls 7 weeks after the 2nd day of Pesach. It falls on the 6th day of Sivan.

Shavuot marks the day that the Torah was given to the Jewish people on Mount Sinai. That day was a very unusual one, with lightning, thunder and the earth shaking. Moses came down from the Mountain, his face all red and glowing, and read the Ten Commandments to the Children of Israel.

THE STORY OF SHAVUOT

In Biblical times, Shavuot was at the time when the Jewish people harvested their wheat crop and their last grain of the season, and began harvesting their fruit crops.

An important part of the celebration of Shavuot in those times was the ceremony of bringing the “first fruits”, or bikkurim, of the harvest to the Temple as an offering of thanks to God.

The bikkurim were carried in beautifully decorated baskets. Families would gather together to walk to Jerusalem and they would sing, dance and have music playing whilst they walked. When they arrived at the Temple, they gave their offerings to the priests who would bless them.

There are many different names for the festival of Shavuot. Some of them are:

‘Festival of Giving of the Torah’

‘Festival of the First Fruits’

‘Festival of the giving of the Torah’

HOW DO WE CELEBRATE SHAVUOT?

On Shavuot we decorate our synagogues and homes with greenery, flowers and even fruits. This reminds us that on the day the Jewish people received the Torah, Mount Sinai bloomed with flowers. Using greenery also reminds us of the harvests, another main idea of Shavuot.

Jewish adults spend the eve of Shavuot staying up all night learning Torah. This custom is called Tikkun Leil Shavuot, which means ‘making ourselves better people on the night of Shavuot’.

Tikkun Leil Shavuot is an extremely important mitzvah (commandment) because as the Talmud tells us, “the study of Torah is equal to all the other mitzvot added together.” (Shabbat 127a)

On Shavuot we eat dairy foods (foods made from milk). These can include cheesecake, cheese-filled pancakes (called blintzes) and quiches. Some people also bake tall cakes to remind us how tall Mount Sinai was. Other people eat fruit, in particular the seven species of Eretz Israel (including figs, pomegranates and dates). 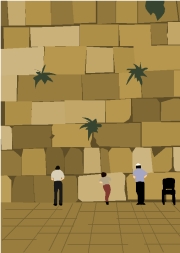 Shavuot is one of the three pilgrim festivals, when in Biblical times all the Jewish people would gather in Jerusalem to celebrate and learn Torah.

In 1967, the Six Day War in Israel ended just a few days before Shavuot. In this war Israel won back the Old City of Jerusalem, which contains the Western Wall of the Holy Temple. So for the first time in 20 years Jews could visit this last remaining part of their Temple again.

On the day of Shavuot in 1967, the Israeli Army opened the Western Wall to visitors. On that day, over 200,000 Jews walked to visit and pray at it. Since then, every year on the morning of Shavuot, the streets of Jerusalem are filled with tens of thousands of Jews walking to the Western Wall (Kotel).