The candle is a very important symbol for Jews. Fire is warm and inviting. The Kabbalah (Jewish Mysticism) says that the flame is a symbol of God’s relationship to the world and to human beings.

The Hebrew word chai is made up of the Hebrew letters chet and yud. These letters have a number value of 18. The word means ‘life’ which is highly valued in Judaism. Many Jewish people wear necklaces with Hebrew word Chai on them. 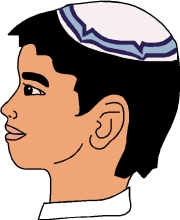 Men cover their heads with a kippah (yarlmulke/scullcap) to shows their respect for God. Married religious women also often wear a head covering, such as a wig, scarf or hat. This shows their modesty. 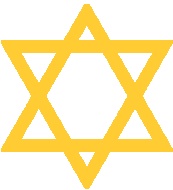 The six-pointed star known as the Star of David (Magen David) is an ancient symbol. However, it was not always a Jewish symbol. Today, however, it is on the flag of the State of Israel. 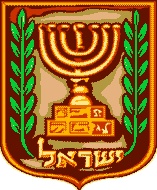 The menorah is a very familiar symbol which is seen in most synagogues around the world. It has seven branches and was originally the candelabrum that was placed by the Israelites in the Tabernacle and later in the Temple in Jerusalem. Today, we see the menorah on the emblem of the State of Israel.

The mezuzah is a symbol attached to the doorways of Jewish homes that identifies them as `Jewish’. The mezuzah has two parts – a parchment scroll on which certain prayers are written, and a protective container for the scroll. The protective container is usually decorated to make it attractive. Although the scroll usually cannot be seen inside the container, it is the most important part.

The shofar is a polished ram’s horn used in Jewish services at certain times of the year. It is blown to bring in the New Year and mark important events. 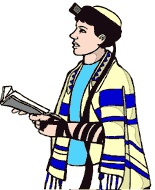 The tallit is known in English as a prayer shawl. It is worn during prayers and reminds us that God is protecting us and also symbolises that we are wrapping God’s laws around us.

Each morning Jewish men bind tefillin (leather boxes containing four specific passages from the Bible) to their head and arm during prayers. This practice is meant to take them to a higher spiritual level.

It is a mitzvah (commandment) to put on tzitzit as a reminder that God is always there and that we should always follow his comandments. Tzitzit are ritual fringes, knotted a special way to symbolise the 613 mitzvot (commandments) in the Torah, and are worn on the corners of four-cornered garments. They are seen on the corners of a tallit (see above) or on an undergarment worn by more religious men.

The word ‘yad’ means ‘hand’ in Hebrew. The yad is a decorative pointer in the shape of a hand that is used to show what place the reader is up to while reading the Torah.

Some Jews wear a kind of good luck charm called a hamsa. It is shaped like a hand and usually has a picture of an eye in its middle. It reminds us of God’s protective hand and his watchful eye over us. The word hamsa is related to the Hebrew word hamesh which means ‘five’ (referring to the five fingers on a hand).