What is Chanukah and Why do we Celebrate It? 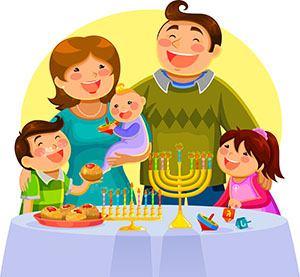 Chanukah is a holiday that lasts 8 days (and nights) and happens every year in late November or December. Chanukah is a happy holiday and we light a Chanukah menorah (called a chanukiah) every night of the holiday. Other activities popular during Chanukah are eating foods made with oil (especially doughnuts and potato pancakes known by their Yiddish name, latkes) and playing dreidel.

Unlike many other Jewish holidays, ‘work’ is allowed on Chanukah – this includes activities like shopping, using a computer or phone, or driving a car. This is because Chanukah is not a holiday we are told about in the Torah – instead, it started later and we are told by the rabbis to keep the holiday.

There are different ways of spelling the word ‘Chanukah’. This is because it was originally a Hebrew word ( חנוכה ) and there are different opinions about the best way to spell it in English. In America, the spelling ‘Hanukkah’ is popular.

How did Chanukah Start?

Back in ancient times, long after the giving of the Torah but when the Temple was still standing in Jerusalem, the Greeks ruled over the land of Israel and everyone in it. At that time, the Greeks still believed in many gods – but this was different from the Jews who believed in just one God (whom we  call HaShem). The Greeks tried to make the Jews be like them and worship their gods.

The Greeks put a large statue of one of their gods in the Temple in Jerusalem and offered sacrifices to it there (this was like bringing gifts to their god). They also wanted the Jews to offer sacrifices to their various Greek gods, and Greek soldiers even started travelling to Jewish towns forcing the Jews there to offer sacrifices to Greek gods. For Jews, this was a very serious sin called ‘idolatry’ because Judaism forbids Jews from worshipping gods other than HaShem, and offering a sacrifice is a way of worshipping a god.

The Greek soldiers came to the town of Modi’in and started forcing the people there to offer sacrifices to Greek gods. But an old man called Matityahu refused to offer a sacrifice. Another Jew then wanted to offer the sacrifice instead of Matityahu, but Matityahu killed him to stop him from committing idolatry.  Matityahu then ran away and hid in the nearby hills where he was joined by his 5 sons (who were all adults). Some other people also joined them, and they started making attacks on the Greek soldiers. The Jews were led by Judah, the middle son of Matityahu, and his family became known as the Maccabees (and the revolt they led against the Greeks is called the Maccabean Revolt).

Gradually, the Jews began to beat the Greeks, and after 7 long years of fighting, the Jews took back control of Jerusalem and the Temple in it. They removed the Greek idols (statues of gods) in it and cleaned it.

Next, the Jews wanted to start using the Temple for themselves. But there was a problem. Inside the Temple was a special golden candlestick, called the Menorah, which was supposed to be kept lit all the time. Instead of candles, people used to put oil in a small container, add a wick, and then light that (candles had not been invented yet). And the oil used for the Menorah was specially prepared by the Kohanim (priests) but this took 8 days to do. The Jews could find only one small container of the specially prepared oil, enough to keep the Menorah lit for only one day, but they knew it would take 8 days to prepare more oil to use. What should they do? Light the Menorah now, or wait until they had enough oil to keep it lit without running out of oil?

They chose to light the Menorah. And a miracle happened – the small amount of oil they had kept burning for 8 days and did not go out. By the end of the 8 days, they had prepared more of the special oil and were able use that to keep the Menorah lit.

Today we keep Chanukah to remember all these events, and especially the miracles HaShem performed for us. It was a miracle that the oil continued to burn for 8 days, and it was also a miracle that we managed to defeat the Greeks when their army was bigger, better trained, and better equipped.

How do we celebrate Chanukah?

Chanukah starts every year on the 25th of the Hebrew (Jewish) month of Kislev. This is usually in December, but sometimes in late November. The holiday lasts 8 days.

Families celebrate Chanukah every evening at home when they light the Chanukah menorah (called a chanukiah). We light this every night of Chanukah to remember the miracle of the oil that lasted for 8 days. Unlike the Menorah in the Temple which had 7 branches and lights, the Chanukah menorah has 9 – one for each of the 8 days of Chanukah, plus an extra one for an additional light called the ‘shamash’ which is used to light all the other ones. The Chanukah menorah can be put anywhere in our home, but it’s considered best to put it in a window so that people outside our home can also see it and be reminded of the miracles God did for us.

We light one candle on the first night of Chanukah, and then one more candle every night, until the 8th night when we light 8 candles (as well as the shamash light or candle). There are special rules for how to light the candles and you can see them explained in the video How to Light the Chanukah Candles. The video also explains which blessings to say when you light the candles.

Other ways people celebrate Chanukah include playing dreidel (savivon in Hebrew) and eating foods made with oil (especially doughnuts or latkes, potato fritters). Some families also give Chanukah gelt (‘money’) to the children in the family, but this is usually chocolate wrapped in foil to look like coins and not real money.