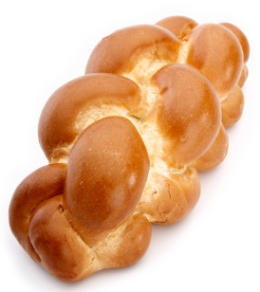 Challah is the traditional plaited bread specially baked for Friday Night (Shabbat) and other holidays. These days most challah is store-bought, although some households still make their own.

‘Challah’ means ‘dough’, in particular the separated portion of dough from each batch of bread. It is a mitzvah (commandment), as prescribed in the Torah, to separate the head of the challah, which in ancient times was given to the high priests of the Temple. Since the destruction of the Temple this mitzvah has been fulfilled by removing a portion from the head of the braided dough before it is baked. The piece is then burnt in the oven to symbolise and commemorate sacrifice as well as the destruction of the Temple.

It is only necessary to separate a piece of dough for burning from breads made from barley, maize, spelt, wheat or oats; all ‘rich’ grains. Challah was once considered a rich man’s bread since white flour requires additional processing and is therefore more expensive than other, less-refined varieties of flour. Challah was specifically eaten on Shabbat and holidays as a way of honouring the day by eating only the best quality foods on it, and this tradition remains.

A piece of challah for ritual burning can be removed after baking if it has not been done beforehand. A special blessing is recited upon this separation: “Blessed are You, Lord our God, King of the Universe, who has sanctified us with His commandments and commanded us to separate.”

On Friday Night, two challot (the plural of challah) are present on the dinner table. This commemorates the double portion of manna that the people of Israel in the desert received from God on Fridays. This double portion provided them with manna for Shabbat. Some people sprinkle sesame or poppy seeds over the challah before baking to further symbolise this manna.

A blessing is recited before the breaking and eating of the challah. It is Sephardi practice to refrain from cutting it with a knife, because a knife reminds us of weapons of war like those used to profane the altar, as set out in Exodus 20:22. This custom also reflects Isaiah’s prophecy in Isaiah 2:4: “And they shall beat their swords into plowshares…” Thus challah is broken up and divided by hand by Sephardi Jews, but most Ashkenazi Jews use a knife to cut it.

Before the challah is blessed, during the blessing of the wine, it is kept covered by a cloth. This is to shield its sensitive feelings: perhaps the challah may be upset that the wine gets blessed before it! This teaches us sensitivity to the feelings of others, even of inanimate objects.

After the challah has been blessed it should be salted, in recognition of the ritual of the Temple sacrifices, and a reflection of Genesis 3:19: “By the sweat of your brow shall you get bread to eat.”

It is customary to leave the broken bread on a communal plate, or for a piece to be put on every individual plate instead of handing it to people, to stress that we do not receive our bread from man. This further reminds us of God’s presence, creation and provision.

Challah is much more than simply plaited bread eaten on Shabbat and holidays. It is highly symbolic, reminding us of the significance of even the smallest things, and also that there is reason for everything we do.

Jewish Foods: What is Challah?

About.com: How to Make Challah

You Tube: How to Braid a 6 Strand Challah