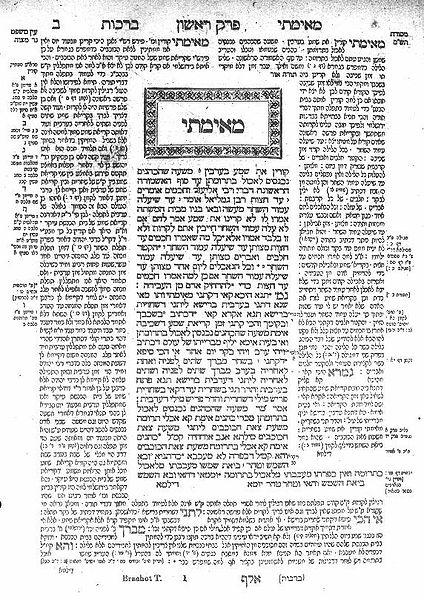 A page scanned from Mesechet Brachot of the Talmud. The central block (under the large writing) sets out part of the Mishna, and the surrounding blocks of text are the gemara which comments on the Mishna

When you look at a page of the Talmud today, you will find the Hebrew text of the Mishna is featured in the middle of the page. Interspersed between the Hebrew of the Mishna are explanations in Aramaic which are called the ‘Gemara’.

The text of the Mishna quotes rabbis who lived from about 100 B.C.E. to 200 C.E. These rabbis are called the ‘Tanaim’, ‘teachers’. In this group are included such greats as Rabbi Yochanan Ben Zakkai, Rabbi Shimon Bar Yochai, Rabbi Akiva, and of course Rabbi Yehudah HaNasi. In the Gemara, they all have the title Rebbe before their first name.

The text of the Gemara quotes rabbis who lived from about 200 C.E. to about 500 C.E. These rabbis are called the ‘Amoraim’, ‘explainers’ or ‘interpreters’. In this group are included Rav Ashi, Rav Yochanan, etc. Names of the Amoraim are not so famous, but they all begin with the title Rav.

The Mishna and Gemara texts are surrounded by other layers of text and commentaries from later periods. The text surrounding today’s Talmud also quotes Rishonim, literally, ‘the first ones’, rabbinic authorities who predated Rabbi Joseph Caro, the 16th century author of the code of Jewish law known as the Shulchan Aruch. Among the most prominent Rishonim are Rashi, his students and their descendants, who were the chief authors of the Tosaphos: Maimonidies and Nachmanides.

Adapted from articles on Aish.com and Ohr.edu