The history of Kabbalah stretches back to Biblical times, and it is still very much a living, developing tradition today. What originated as an esoteric ritual, studied in secret by a select elite, is yielding increasingly widespread interest.

In Biblical times, bands of prophets who claimed to have ecstatic visions would wander through the Israelite kingdoms. Prophets reached their visionary state through meditative practices and devotions. Although mystics later found secrets in virtually every word of the Bible, the most important sections of the Bible for mystics are the creation story and Ezekiel’s vision of God’s throne.

In Mishnaic and Talmudic times, many of the key rabbinic teachers are described as engaging in mystical practices and study. The mystical tradition, ‘the act of creation’ and ‘the act of the chariot’, could only be passed on to small groups of one or two disciples who proved that they already understood on their own.

During the Middle Ages Jewish mysticism truly began to flourish. Kabbalah was prevalent in Egypt, Germany, and especially Provence and Spain, where modern scholars say the Zohar, the most famous and influential book of Jewish mysticism, was written. The word ‘kabbalah’ gained wide usage in the 13th century as a synonym for Jewish mysticism. Its literal meaning is ‘that which has been received’, which underlines the notion that mystical secrets are passed down through the generations.

Continuous revelation is also a prime characteristic of the kabbalistic tradition. Many kabbalists, from Abraham Abulafia and Abraham ibn David in 13th century Spain through to Rabbi Yitzhak (Isaac) Luria of Safed  and Rabbi Moshe Haim Luzatto of Italy, down to Rabbi Menachem Mendel Schneerson, who died in 1994, attest to having received revelations from on high.

After the Jewish expulsion from Spain in 1492, the Galilee town of Safed (Tzfat in Hebrew) became a major center of kabbalah. In 1569 a mysterious young Jew from Egypt named Yitzhak Luria began teaching his kabbalistic system to a select group. Luria, who could “speak the language of birds and trees, see the future and know all the incarnations a person had been through”, died two years after arriving in Safed. His disciples spread his reputation and ideas throughout the Diaspora. See the video below for more detailed information about Rabbi Luria (also known as the Ari or the Arizal).

The messianic upheaval of Shabtai Tzvi was inspired by Lurianic kabbalah. Shabtai Zevi and his prophet, Nathan of Gaza, based many of their concepts on Lurianic kabbalah, but also added their own insights into the cosmic drama that kabbalah describes.

The dissemination of kabbalistic ideas and spiritual techniques took a leap forward in the 18th century with the founding of the Chassidic movement, which stressed the human desire to cleave to God. In fact, early Chassidim regarded spreading kabbalah as their major task. The opponents of Chassidim, headed by Rabbi Elijah (the Gaon) of Vilna, were also kabbalists, yet were against the popularization of the mystical doctrines. A video at the bottom of this page gives more information about the Vilna Gaon.

Meanwhile, Rabbi Sar Shalom Sharabi, who moved from Yemen to Jerusalem around 1740 and headed the Beit El Yeshiva for training disciples in kabbalistic prayer, helped to spread kabbalah throughout North Africa, Yemen and Iraq.

Academia has played a significant role in the revival of kabbalah since World War II. Hebrew University professor Gershom Scholem, who devoted his life to the subject, is considered one of this century’s greatest intellectuals. Younger scholars, such as Moshe Idel, Yehuda Leibes, Charles Mopsick and Elliot Wolfson continue to enhance kabbalah’s prestige. Kabbalah has also influenced contemporary intellectuals, like literary critic Harold Bloom, semiotician and novelist Umberto Eco, and philosopher Jacques Derrida.

Kabbalah’s popularity continues to grow, among Jews and non-Jews alike. It is currently very popular with celebrities looking for a counter to the exaggerated materialism of their lives. Kabbalah offers a spiritual path that is both mystical and rooted in the Bible, uniting physical action in this world with the penetration of spiritual planes. 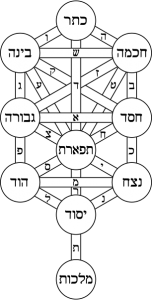 Kabbalah was once an esoteric discipline reserved for men of a certain age and marital status who had already studied the Talmud. Today kabbalah is more accessible to both men and women, but it remains a complex and often impenetrable field of study. It should also be stressed that many Jews live fully observant lives without ever delving in to the Kabbalah and it is an optional area of study. Listed below are some of its key concepts:

Infinite Light – the light that filled all of existence before the creation. God had to withdraw his infinite light in order to create an empty space for other beings to appear. This contraction is called tzimzum, and is real only from the point of view of creation; from God’s perspective, all is still light.

The Ten Sefirot – ten qualities or dimensions from which everything in the world is composed. The sefirot have many different names, but they are most commonly known as Crown, Wisdom, Understanding, Love, Power, Beauty, Eternity, Splendor, Foundation and Kingdom.

Breaking of the Vessels – After God withdrew His infinite light, He attempted to emanate light into ten vessels; the seven lower vessels shattered, and sparks of divine light fell into fragmented reality.

Berur (clarification) and Tikkun (rectification) – Our work as humans is to rescue the divine sparks which have fallen into darkness (berur) and also strengthen the human and cosmic vessels so they can hold the light without shattering. This is achieved through good deeds performed with awareness and also through meditation and prayer. When the tikkun is complete, the messianic age will arrive.

The Five Worlds – Kabbalah teaches that there are five worlds; the world of physical reality is proximate to the lowest world, the world of action. Above us are the worlds of formation, creation, emanation, and a world called primordial man.

Soul and Body – Kabbalists believe in reincarnation, and also in resurrection. The body, as well as the soul, is eventually rectified and perfected.

Zohar – the most influential work in the kabbalistic canon. Written as an account of the wanderings of Rabbi Shimon Bar Yochai and his disciples through 2nd century Palestine and the mystical teachers and teachings they encounter.

Kabbalistic Magic – By manipulating the names of God, angels and demons with amulets and spells, reality can be affected. A generic theme running through much of kabbalah is the integration, rectification and redemption of all the worlds.

‘Who was Rabbi Isaac Luria (the Arizal)?’ by Dr Henry Abramson

‘Who Was Rabbi Shlomo Alkabets?’ by Dr Henry Abramson