Tzitzit are the strings attached to a tallit (prayer shawl) and are sometimes called ‘ritual fringes’ in English. A tallit gadol is the large prayer shawl and a tallit katan is the small one described below.

Men and boys almost always wear the small tallit called a Tallit Katan (‘small tallit’) or Arbah Kanfot (‘four corners’), usually under the clothing. It should be at least 16 x 16 inches in the front and in the back. It is usually simply referred as tzitzit.

Men wear tzitzit at all times to take advantage of any opportunity to do a mitzvah, even though, strictly speaking, the Torah does not require us to wear tzitzit unless we are wearing a garment with four corners. 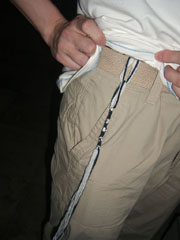 Although the tallit katan is an undergarment, many men choose to place the actual tzitzit outside their clothes so that they may be a visible reminder of God’s commandments.

The strings which are used to make the tzitzit, must be made especially for themitzvah of tzitzit, and must have rabbinical certification.

The Torah instructs us to insert a blue thread into each corner of the tallit. This particular blue, known as techailis, can only be obtained from an animal known as the Chilazon (probably a kind of ancient sea snail). Since the exact identity of this animal is no longer known, we are unable to perform this part of themitzvah of tzitzit. However tzitzit which do not contain the blue thread are still perfectly valid.

HOW TO TIE TZITZIT

An official halachic way of tying tzitzit is outlined below. Please note that there are differences in Ashkenazi and Sephardi tradition as to how many knots should be tied in what sequence with the spiralled thread.

Before tying tzitzit to a tallit katan, a person should first practice using twine or string or buy a tzitzit pack which are available from most Jewish bookstores.

There should be sixteen strands in total: four long ones and twelve short ones. The strands need to be separated into four groups. Each group should have one long and one short strand. The longer strand in the group is called the ‘shammash’ and is the one used for winding.

The shammash is spiralled another eleven times, followed by another double knot, another thirteen times around and then a final double knot. If any shortening needs to be done it should be done with your teeth and not with a scissors or knife.

The result is the ritual tassels, which hang from prayer shawls and ritual garments worn by Jewish adult males.

Being Jewish: Tzitzis: What Are Those Strings Jewish Men Wear?