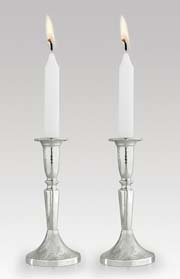 The candle is very significant in Jewish life. Fire is one of the basic elements of the world. It is frightening, as well as warm and inviting. In the Kabbalah (Jewish mysticism), the flame is said to symbolise God’s relation to the world and man.

Chai (life) has deep meaning, and is a central part of our Jewish vocabulary and philosophy. For more information see our Chai page.

Tradition, and not an explicit command from the Bible, requires men to cover the head as a sign of humility and subservience to God. Married women display modesty by wearing a head covering. The Code of Laws states, “It is a custom not to walk bareheaded under the heavens”.

The six-pointed star known as the Star of David (Magen David) is an ancient and widespread symbol. However, it is actually a relatively new Jewish symbol, closely associated with the establishment of the State of Israel.

The menorah originated as a seven-branched candelabrum placed by the ancient Israelites in the Tabernacle and later in the Temple in Jerusalem. It was used to illuminate (decorate) manuscripts during the Middle Ages, and Kabbalists (Jewish mystics) took it as a representation of the sefirot (emanations of God). Today the menorah is a familiar Jewish symbol and the emblem of the State of Israel.

The mezuzah is a symbol attached to the doorways of a Jewish home that identifies it as `Jewish’. There are two component parts to a mezuzah: a small parchment scroll on which specified prayers are hand written, and a protective container for the scroll. The scroll is the more important part; a protective case by itself is not a kosher (valid) mezuzah.

The shofar is a polished ram’s horn used in Jewish services at certain times of the year. It is perhaps one of the strangest among the items used for Jewish ritual. The shofar is basically the horn of a ram that has been smoothed, its appearance and sound evoking the primitive in humanity.

The tallit, or Jewish prayer shawl, is a physical symbol of God’s protection and provision, and a spiritual expression of wrapping oneself in God’s laws.

Each day a Jew wears tefillin (phylacteries) – leather boxes containing four specific scriptural passages – bound to their head and arm during prayers. This practice is meant to elevate his own consciousness and the material world to a higher level of spirituality.

The symbolism behind the daily wearing of tzitzit reflects the incredible devotion and obedience involved in the practice of Judaism. There is a commandment to put tzitzit on any four-cornered garment, as stipulated in Numbers 15:37-41. This reminds us of God’s presence, His commandments and His everlasting love.

The yad is one of the most decorative accessories of the Sefer Torah. Nevertheless it has a degree of sanctity approaching that of the Torah scroll itself.