The Torah is a sacred book of stories, history and law. It is the word of God, given with love and for all eternity. Torah is an intergenerational sacred text about us, our children, and our children’s children. It is the basis of Judaism and of what we Jews hold important.

The word ‘Torah’ (which means ‘teaching’ in Hebrew) can be used with either a narrow or a wide meaning. Used with the narrow meaning, it refers to the first five books in the Bible; these books are also known as the Five Books of Moses. Some people use the term ‘Torah’ with a slightly wider meaning of the entire Bible (bearing in mind that the Jewish Bible does not include the New Testament which Christians consider to also be part of the Bible), but the word ‘Torah’ is often used with a very wide meaning to refer to all Jewish beliefs, practices and writings that have been handed down from generation to generation. 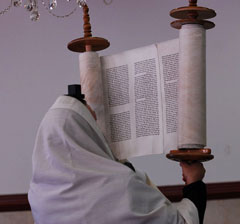 At the conclusion of every reading of the Torah in synagogue, it is lifted up and shown to the congregation. This practice is known as hagbah.

We are told by the rabbis not to simply know (be familiar with) Torah but to also live it (i.e. to put its values into practice). Therefore we must seek out from the Torah the wisdom that we need to live with others, and not simply seek out its theoretical knowledge. Jewish intellectuality must be linked to moral and spiritual goals, as study alone is not sufficient to enable us to live a good life. “He who only studies Torah is considered as one who has no God”, the Talmud in Avodah Zarah points out.

The Torah instructs and enlightens our soul through its teaching. The mitzvot (commandments) outlined in the Torah provide us with guidelines for a course of thought, speech and action that will lead us to the fulfilment of our potential. When we observe the mitzvot of the Torah, we are living according to God’s plan.

The sages said that “The Torah has seventy faces. Turn it around and around, for everything is in it”. The breadth of the Torah mirrors the astounding interaction of a people in a changing environment. The Torah is an interpretation of the genesis, development and growing self-awareness of a people in its search for sacred meaning. By understanding our patriarchs and matriarchs, we are more able to understand our spiritual roots. 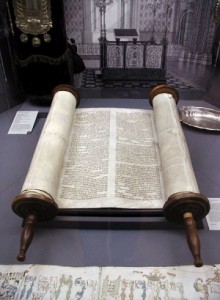 There are two parts to the Torah – the Oral and the Written. The Oral Torah was given by God to Moses on Mt Sinai by word of mouth. It explains the written words. The essence of the Oral Torah is its flexibility, whereas a written text is rigid. However, as a concession to human limitations, eventually the Oral Torah needed to be written down to ensure it would not be forgotten. The written version of the Oral Torah became the Mishnah and the Talmud.

Moses wrote the Written Torah given by God into five books, namely, Genesis (Bereshit), Exodus (Shemot), Leviticus (Vayikra), Numbers (Bemidbar) and Deuteronomy (Devarim). These books contain all the commandments and ideas central to Judaism and Jewish thought. Jews regard these books as very holy. Jews live by the writings of the Torah; they have read it, studied it and have written commentaries to try to explain it. The Torah has always been the most precious possession of the Jewish people. Parents try to teach their children to listen to and learn from the teachings of the Torah.

The Five Books of Moses

The Five Books of Moses are the foundation of Judaism and are the first five books found in the Bible. The books are:

This book deals with God’s creation of the world. It describes how people become wicked and God destroys them with a flood, sparing Noah and his family. It continues with a description of the lives of Abraham, Isaac and Jacob. It concludes with Jacob’s son (Joseph) settling in Egypt and his subsequent death. The Hebrew name for the Book of Genesis is Bereishit.

This book describes how the Jews become slaves in Egypt and how Moses redeems them. They cross the Red Sea to freedom and then sin by worshipping the Golden Calf. God forgives them and they receive the Torah on Mount Sinai. The Hebrew name for the Book of Exodus is Shemot.

This book describes how sacrifices were made in the Temple, the foods we are allowed and forbidden to eat, the times of the major festivals and which mitzvot (commandments) we are to observe during these festivals. The Hebrew name for the Book of Leviticus is Vayikra.

This book describes how the Jews continue their journey through the wilderness. It tells of their rebellion against Moses, how hostile nations try to defeat them, and concludes with Israel at the border of the Promised Land about forty years after leaving Egypt. The Hebrew name of the Book of Numbers is BaMidbar.

This concluding book is also known as Mishnah Torah, the repetition of the Torah. This book takes the form of speeches given by Moses shortly before the Jews entered the Promised Land. This book contains many laws and teachings and concludes with the death of Moses. The Hebrew name of the Book of Deuteronomy is Devarim.

In a synagogue, the Torah is traditionally read from a scroll of parchment called the Sefer Torah rather than from a book. The word ‘sefer’ in modern parlance means ‘book’, but in ancient times books in their modern form had not yet been invented and all books were written as scrolls and this tradition has been coninued by Jews in relation to the Torah. The Sefer Torah is a scrolled, parchment version of the Chumash (an abbreviation of Chamisha chumahei Torah which means ‘The five books of the Torah’, also known as ‘the five books of Moses’.) The writing in the Sefer Torah contains no vowels or punctuation, only handwritten letters, so the reader must be very skilled in Hebrew in order to read it successfully. In addition, as the Sefer Torah is not merely read in synagogue but rather chanted, the reader must also remember the correct way to chant the particular portion which he is ‘reading’.

Having an Aliya (Being Called Up to the Torah)

How to Chant the Torah Blessings

How do You Know the Torah is True? A Study in Comparative Religion