Jews continue to study the Tanach in the original Hebrew so as to avoid the changes of meaning and nuance which occur when a text is translated. 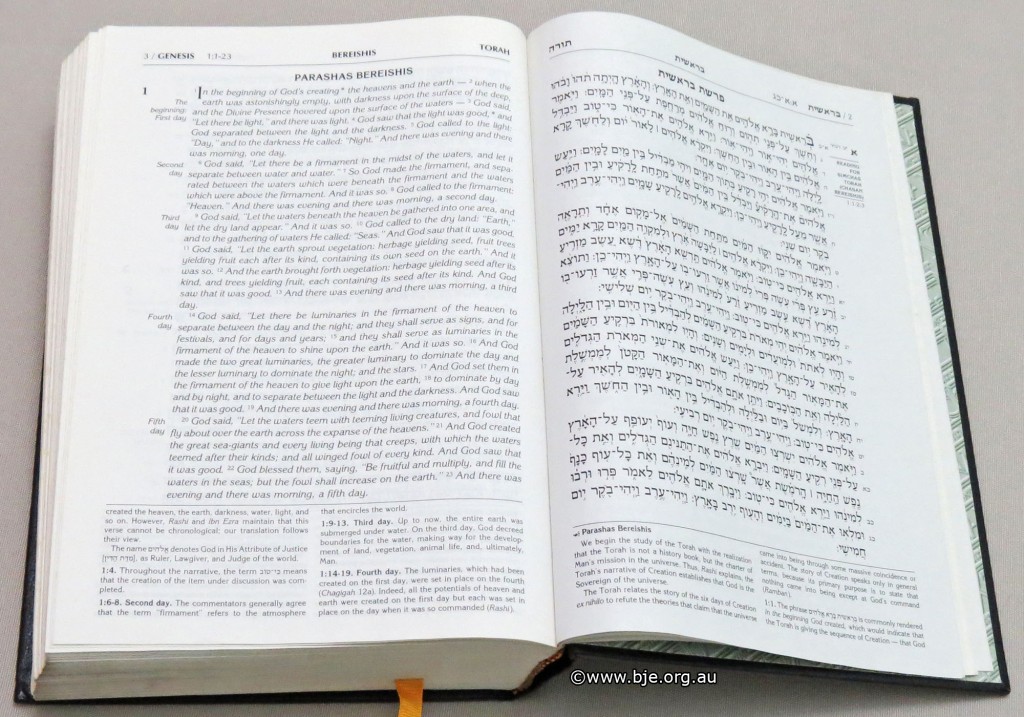 The first page of the Book of Genesis in a contemporary edition of the Tanach which has English translation placed on the page opposite the Hebrew. The writing at the bottom of the page is commentary (explanation of the text above). Note that although English reads from left to right, Hebrew reads from right to left – hence the Hebrew text starts on the outside edge of the page. This also explains why, to eyes used to English language books, this page appears to be near the back of the book – in fact, it is near the front as the Tanach is a Hebrew language book which reads from right to left.

The Tanach is made up of three components:

1.      Torah – Chumash,  the five books of Moses, namely: Genesis, Exodus, Leviticus, Numbers and Deuteronomy (sometimes referred to in English as the Pentateuch).

The word Tanach – the word Jews use to refer to the Bible – is an acronym formed from the initial letters of the names of the three sections of the Tanach (although ‘K’ and ‘ch’ are distinct letters in English, they are written with the same letter in Hebrew). 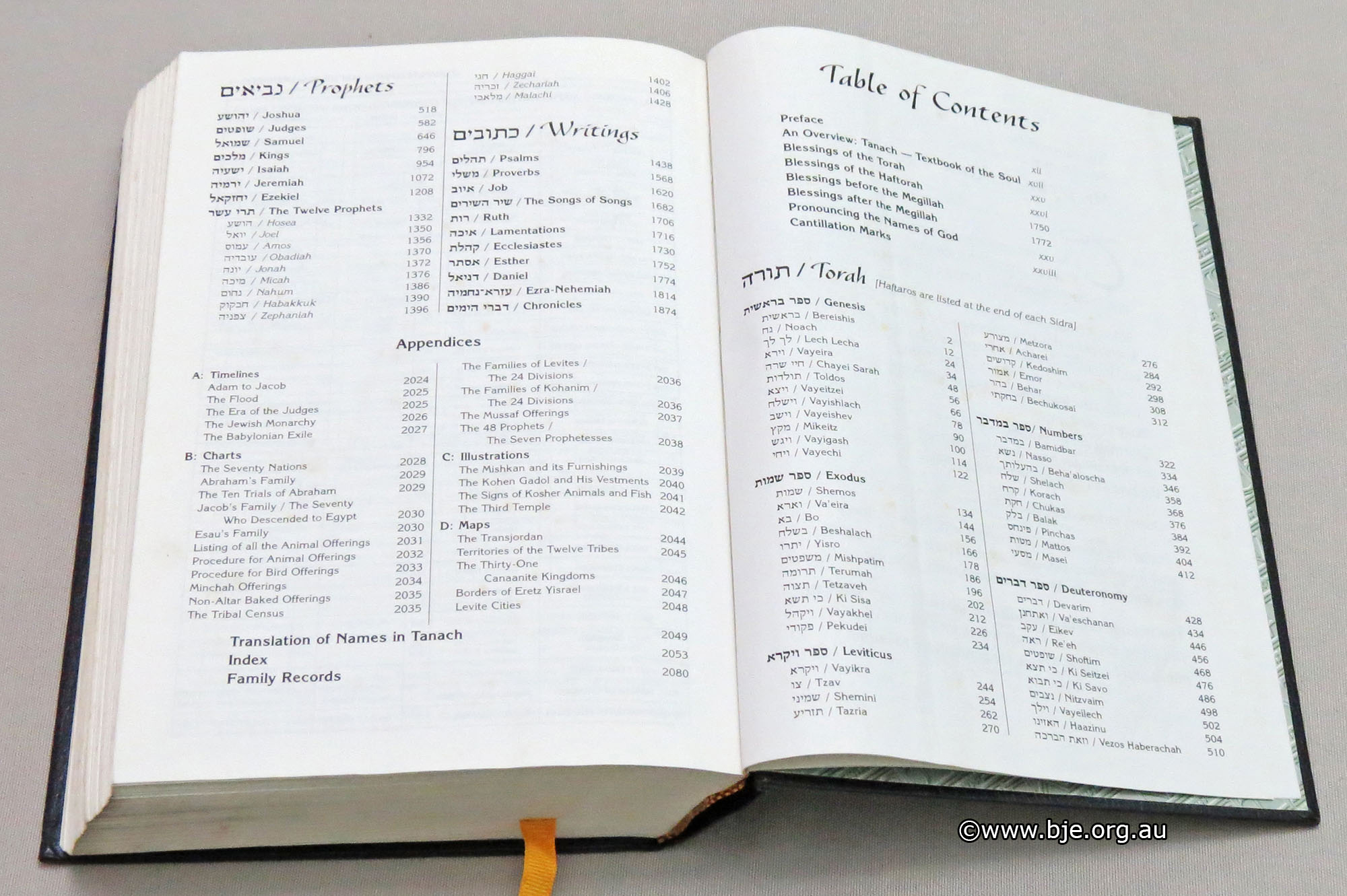 The Table of Contents for a Tanach (Jewish Bible). Note that the books of the Tanach are arranged in a different order to how they are arranged in a Christian Bible. Although this edition of the Tanach includes an English translation (in addition to the original Hebrew text), the pages are ordered from right to left as the primary text is in Hebrew which reads from right to left (unlike English which reads from left to right). The Table of Contents above is actually near the beginning of the Tanach, although to eyes used to English language books it may appear to be near the end Each of the Five Books of Moses is broken up into its ‘weekly portions’ as read in synagogues.

Jewish tradition considers the three divisions of Scripture to be sacred and inspired by God, but distinguishes between degrees of inspiration. The Torah is more inspired than the Prophetic books, as it is a more direct communication from God to Moses. Then the books of the Prophets are more inspired than the Writings because the Writings result from the less intense form of communication known as the ‘Holy Spirit’. To emphasise these differences, pious Jews will never place a book of lesser inspiration on top of one that is considered more inspired.

This section combines historical events with religious teachings. Most of the events that are described in the books have been confirmed by archaelogical evidence. Nevi’im is divided into two sections: the First and Last Prophets.

This section contains the books of Yehoshua (Joshua), Shoftim (Judges), Shmuel (Samuel) and Melachim (kings). These books describe the history of the Jewish people after the death of Moses.

Joshua deals with the Israelites’ entry into the Promised Land.

Judges deals with the wars between the Israelites and their neighbours. Judges who acted as military leaders saved the Israelites. The people thanked God at first, but soon began to worship the gods of other tribes.

Samuel describes the foundations of the monarchy that was established.

Kings outlines the history of the Judean and Israelite kings from the time of the establishment of the Temple in Jerusalem until the beginning of Babylonian captivity.

Isaiah His prophecies focus on the corruption of the people in Judah and the dangerous consequences of this. Isaiah promises rewards for those people who follow the will of God.

Jeremiah He consoles the people of Judah and Israel after the destruction of the Temple.

Ezekiel His prophecies are a mixture of laments and visions of future events such as the resurrection of the dead.

This section contains the Scriptures or ‘Wisdom Literature’. Like the books of Nevi’im, these books record how the way the Jews behaved towards God has affected their history. The books are: Psalms (Tehillim), Proverbs, Job (Iyov), The Song of Songs (Shir Hashirim), Ruth (Rut), Ecclesiastes (Kohelet), Daniel, Ezra, Nehemiah and Chronicles (Divrei haYamim).

Psalms This is a collection of 150 praises to God. It is a liturgical compilation whose main subjects include praise and piety.

Proverbs This is a book of wise phrases, short parables and fables ascribed to King Solomon. It gives advice for upright living.

Job This book is a dialogue between Job and three friends concerning the question of evil and the relations between human actions and reward and punishment.

The Song of Songs This is a love story attributed to King Solomon. It represents the love between God and the Jews.

Ruth This tells the story of a woman’s conversion to Judaism and the origins of King David’s family.

Lamentations This is the saddest of all the books of the Tanach. Jeremiah describes the destruction of Jerusalem and the first Temple which he had warned people about for so many years. It is a poem lamenting the sorrows of Zion following the exile of the Israelites and Judeans.

Ecclesiastes This book considers the meaning of life. It contrasts the power of God with the limitations of humanity. The main subjects in this book include faith and its relation to human endeavour.

Esther This book describes how Esther, the Jewish wife of the king of Persia, saved the Jewish people from destruction. The book forms the basis of the celebration of Purim.

Daniel This book deals with dramatic visions about the end of time. One of the main subjects is the destiny of the faithful and how they will be saved by God.

Ezra This book deals with the Jews’ return to Jerusalem.

Nehemiah This book tells the story of the rebuilding of the Temple.

Chronicles Chronicles 1 and 2 tell the history of the Jewish people from Adam until the end of their Babylonian captivity.

ORT: Navigating the Bible (includes text of the Bible in both Hebrew and English)