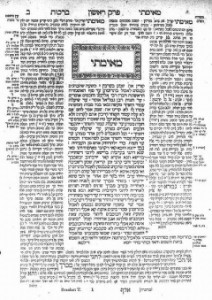 A page from the Talmud. The central block of writing (underneath the boxed word in large lettering) is an extract from the Mishna, and the blocks of text surrounding it are commentaries on and explanations of the Mishna.

Until the 2nd century C.E., the Oral Torah was passed down in verbal form alone. In the years following the destruction of the Second Temple the fear arose that it would be forgotten. To address this fear, the sages, led by Rabbi Yehudah HaNasi (Rabbi Judah ‘The Prince’), wrote the Oral Torah down in a series of books called the Mishna. The Mishna, completed in 188 C.E. was basically an outline and did not include any in-depth analysis or explanation. Consequently, about three hundred years later, the Gemara was composed by other sages, led by Rav Ashi and Ravina.  The Gemara contains commentary on the Mishna. Together the complete collection of Mishna and Gemara writings make up the Talmud.

There are two versions of the Talmud: Jerusalem and Babylonian. The Babylonian Talmud is the more comprehensive, and is the one usually meant when people refer to ‘the Talmud’. Naturally there are also commentaries on the Talmud by famous scholars, including Rashi and Maimonides (the Rambam).

Sections of the Talmud

The Talmud is made up of six sections, called sedarim (orders). Each seder contains several books called mesachot (singular: mesechet) or ‘tracts’.

2. Mo’ed (Season) This section deals with the laws of Shabbat and Yom Tov (holidays). Its 12 mesachot are:

3. Nashim (Women) This section deals with the laws of marriage and divorce. Its 7 mesachot are:

4. Nezikin (Damages) This section deals with civil law, such as laws about damages and theft. It also deals with ethics. Its 10 mesachot are:

5. Kedoshim (Holy Things) This section deals with sacrifices. Its 11 mesachot are:

6. Tohorot (Purities) This section deals with laws of ritual purity. Its 12 mesachot are: 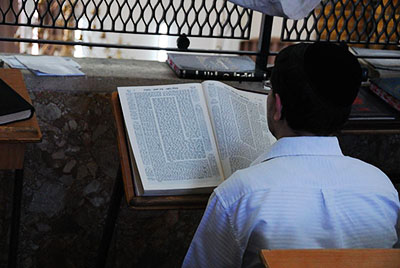 A man studying a page of the Talmud

At the First International Congress of the Agudath Yisrael World Movement in August, 1923, Rav Meir Shapiro of Lublin, Poland, proposed uniting Jews worldwide through the daily study of a page of Talmud. His proposal was well recei ved and Daf Yomi (A Daily Page) has now completed its 12th cycle (each cycle takes approximately 7 1/2 years).

Eliezer Segal: A Page from the Babylonian Talmud

ORT: The Sea of Halacha

The Talmud (uploaded to YouTube by Hedge School of Hidden Knowledge)


What is the Difference Between Torah and Talmud? (looks at the fundamental differences between the written Torah and the oral law, or oral Torah, of which the Talmud is the most significant item)