There are many sacred writings in Judaism, all of which teach Judaism’s adherents how to live ethical and moral lives. The writings are a major source of the laws which regulate Jewish life (this law is known in Hebrew as halachah). Jewish sacred writings are read and studied on an ongoing basis by believers.

Judaism’s sacred texts serve the same purpose as those of all the other religions. They:

In Judaism, the sacred texts are considered to be:

The Tanach (‘Bible’ in English) 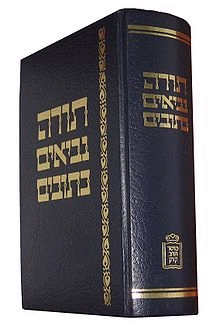 A modern printed edition of the Tanach (Hebrew-only version)

The Tanach is made up of three parts:

1. The Torah, also known as the Five Books of Moses. These 5 books are Genesis, Exodus, Leviticus, Numbers and Deuteronomy and they are considered the absolute foundation of Judaism. The major part of these books was given to Moses on Mt Sinai together with the Ten Commandments and the Oral Law. They were all written in Hebrew. The Hebrew root of the word ‘Torah’ means ‘to teach’.

2. Nevi’im, or ‘Prophets’, contains the books of Joshua, Judges, Samuel, Kings, Isaiah, Jeremiah, Ezekiel and the Twelve Later Prophets. These books are partly historical, mainly prophetic and teach ethics and morals to a people straying from God’s ways.

3. Ketuvim, or Writings, contain David’s Psalms, Solomon’s Proverbs, the Five Megillot (Scrolls), the books of Ezra and Nehemia, and Chronicles. Many of these books are historical. Most teach God’s way and the correct, ethical way to live.

The Mishnah is the written compilation of the Oral Law, which Moses received on Mt Sinai when he received the Torah. The Oral Law explains how to carry out the laws of the Torah. This law was passed down from generation to generation and it remained oral even after 586 B.C.E., when the Jewish Temple was destroyed and many Jews were sent into exile in Babylon.

The Jews’ life in exile was very different. With neither Temple nor priests, this era saw the introduction of synagogues, rabbis and personal prayer. With the changing times, the Oral Law needed to be re-interpreted and adapted to changed circumstances.

In time many of the exiled Jews returned to Israel, where Ezra and Nehemia had rebuilt the Temple and Jewish life. In 70 C.E., the Temple was again destroyed and the Jews went into permanent exile. In the Diaspora (outside Israel) the dispersed Jews lived in different conditions.

The Oral Law, the word of God, was becoming distorted and was at high risk of being lost altogether. This was because of circustances related to the destruction of the 2nd Temple in 70 C.E. and, in particular, because many rabbis and religious leaders (who were knowledgeable in the Oral Law) were killed when Jerusalem fell to the Roman army. The surviving Jewish sages saw the need for a written compilation of the Oral Law, which would explain to Jews everywhere how to carry out Torah laws. This written compilation which became known as the Mishnah is a record of rabbinic debates in the years 70 – 200 C.E. and the Mishnah was given its final form by Rabbi Yehudah haNasi (‘Judah the Prince’) in about 220 C.E. 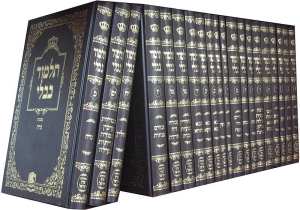 There are two Talmudim (versions of the Talmud): the Babylonian Talmud, which is more widely used, and the Jerusalem Talmud. They were written mostly in Aramaic (then the dominant language of the Middle East) between 300 and 500 B.C.E. in Babylon and Palestine respectively.

The Talmud is the ultimate document of rabbinic thinking and has the two layers already mentioned: Mishnah, which is a set of rules, telling people what to do and Gemara, which contains questioning and application.

The Bible and all its parts raise many questions; people want to know who, how and why about all sorts of topics. Over time explanations, interpretations and answers have arisen to the questions. These ‘answers’ are collectively known as Midrash, from the Hebrew word meaning ‘search or investigation’.

There are two branches of Midrash: those explaining the law are called Midrash halachah and those explaining stories are called Midrashaggadah. Midrash halachah deals mainly with the legal parts of Torah. This type of Midrash seeks to define the laws of Torah to reveal the principles of Torah law and to reveal the laws hidden within the basic law. Midrash aggadah seeks new meanings hidden within the stories of the Bible and highlights the ethical and moral messages in them.

Collections of Midrash aggadah began appearing in the 5th century and the most important is the Midrash Rabbah or ‘Great Midrash’. The second period of collecting and editing was from about 640-1000 C.E. Midrash continues to be written to this very day. Midrashim have been written in many languages, as they have originated from all over the world, although the early ones were written in Hebrew and Aramaic.

Sacred writings are central to Jewish practice, belief and worship. They hold a place of honour and are considered with awe. The Torah is kept in a special place, the Ark, and is dressed in velvet and silver. It has to be specially handled and may not be touched by the human hand (because doing so over time causes physical damage to the Torah). The congregation stands when the Torah is taken out of the Ark and people should not speak while it is being read.

There is a prescribed reading of the Torah and the Prophets that is linked to the lunar calendar. It is read every Shabbat, Monday and Thursday, and there are prescribed readings for every festival. These portions are called parashot haShavuah’ (weekly readings) and are read in a defined sequence so that a particular parashah (the singular of parashot) will always be read will always be read at the same time of year. They dictate the rhythm of the year.

Reading a portion from the Torah marks initiation into manhood, and also womanhood in the Reform synagogue. Reading occurs at the boy’s barmitzvah and a Reform girl’s batmitzvah.

The rituals of the festivals and life cycle are dealt with in the Torah and Talmud.

They have been a source of comfort to Jews through the ages of persecution.

Learning from the texts and adherence to their laws and messages is considered central to the survival of the religion.

The sacred texts of Judaism unite its people. There is a moral and ethical basis to the writings; all Jewish codes of behaviour are determined by them. Sacred writings teach Jews how to live a moral life and as such are a vital guideline.

1. The Torah, Talmud and Shulchan Aruch teach Jews how to carry out all the rituals of the religion.

2. The Torah is used ritually every Shabbat, Monday and Thursday so that Jews do not go for more than 3 days without hearing words from it. This was decreed by Ezra in approximately 440 B.C.E.

4. Orthodox women may have a minyan on Rosh Chodesh (New Month) with permission from their rabbi and they may read from the Torah.

5. The Torah is often used in times of hardship or times of great joy e.g. a Sefer Torah was taken to the Western Wall after the Six-Day War.

6. Talmud and Midrash are not used for rituals but we learn from them how to carry out rituals.

Direction for a Spiritual Life

1. The Torah is the authority; it serves as a guideline for moral and ethical behaviour. All Jewish law is contained in the Torah and following all these laws create exemplary behaviour.

2. The keeping of Shabbat and kashrut (Jewish laws for eating) place one on a higher spiritual level.

3. In order to ensure that Jews know how to live their lives correctly, the Talmud explains in great detail exactly how to carry out the laws.

4. Solomon’s Proverbs and David’s Psalms teach how to live a proper Jewish life. They teach wisdom and give one hope and inspiration. The stories of Esther and Ruth inspire.

5. The Jewish sacred texts give adherents something to believe in; they teach how to treat others, and other people’s property. They create a spiritual atmosphere and their stories bring people back to their spirituality.