Rosh Chodesh was considered to be a women’s holiday for a very long time. Recently, women have begun to reclaim this holiday and have formed all kinds of women’s groups to pray and engage in discussions.

The Babylonian Talmud explains that for some time, no work was permitted on Rosh Chodesh as it was considered to be an important festival. Later on, commentators explained that while women should abstain from certain types of work, men should work normally.

REASONS WHY WOMEN SHOULD ABSTAIN FROM WORKING ON ROSH CHODESH 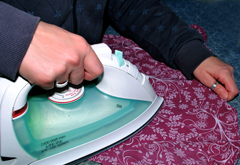 On Rosh Chodesh women refrain from domestic tasks such as ironing. Refraining from such tasks is considered a reward to women for having refused to partake in the Sin of the Golden Calf.

According to Rashi (an important Medieval rabbi and commentator), when the Jews were in the desert waiting for Moses to return from the top of Mount Sinai, Aaron told the men to get all their wives’ jewellery to melt down for the Golden Calf. The women refused to hand over their rings, bracelets, necklaces etc., and so to reward them for this, God decided that they would not work on Rosh Chodesh – it would be their holiday.

Another reason given is that in ‘rewarding’ women in this way, God is trying to make up for the perceived inequality between them and men. This inequality is represented by the symbol of the sun for men and the moon for women. According to Isaiah (30:26), there will come a time when the sun and moon (and hence men and women) are equal. In the meantime, women can enjoy the holiday of Rosh Chodesh as a minor compensation.

Religious women even today do not work on Rosh Chodesh. In particular, they abstain from doing household chores such as laundry and cleaning.

Some Jewish women have formed special groups in an attempt to reclaim Rosh Chodesh as their special holiday. At these ‘Rosh Chodesh groups’, they may study, pray, conduct rituals and hold discussions.

The Jewish Woman: Why is Rosh Chodesh Considered a ‘Women’s Holiday’?

Lookstein Center: Rosh Chodesh – the Women’s Holiday (a lengthy and detailed article on the topic)