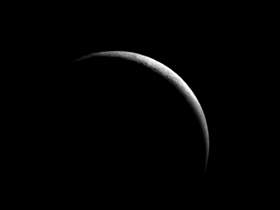 Rosh Chodesh, the new month, is marked by the appearance of the first sliver of the new moon in the sky above Jerusalem in Israel.

The Jewish calendar differs from the common one. It is based on the revolutions of the moon around the earth, whereas the common calendar is based on the earth’s rotation around the sun. The lunar calendar comprises (in a normal year) twelve months each of 29 or 30 days. In a leap year a thirteenth month is added, known as Adar II. A leap year occurs seven times in each cycle of nineteen years; in the third, sixth, eighth, eleventh, fourteenth, seventeenth and nineteenth years. By adding the extra month, the lunar year (354 days) is made to harmonise with the solar year (365 days).

The Hebrew names of the month were adopted from the Babylonian calendar during the Babylonian exile in 586 B.C.E. The first written Jewish calendar was compiled by Hillel II in 359 C.E.

The ‘first month’ of the Jewish calendar is the month of Nissan, in the Israeli spring. However, the Jewish New Year is in Tishrei, the seventh month, and that is when the year number is increased. This concept of different starting points for a year is not as strange as it might seem at first glance. 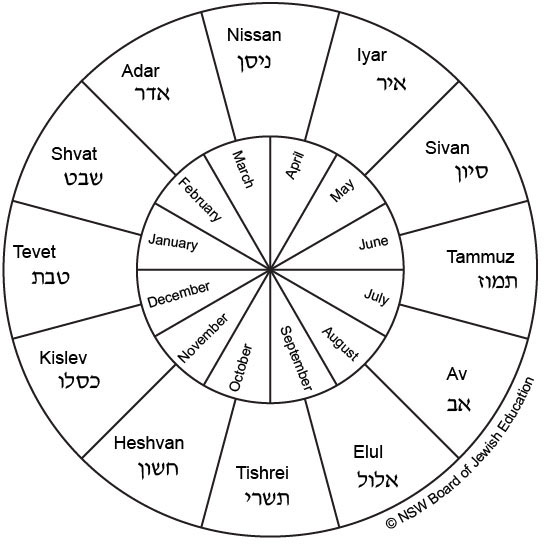 The Jewish year, showing the sequence of the months and when each month falls in relation to the secular months.

The Australian ‘new year’ starts in January, but the Chinese one starts a month or two later. The new ‘financial year’ starts in July, and so on. Similarly, the Jewish calendar has different starting points for different purposes. The days of the New Moon are considered important days in the Jewish calendar (when this will be is calculated according to when there will be a new moon in Jerusalem in Israel). They are known as Rosh Chodesh. On the Sabbath before the New Moon and on the New Moon day itself, special prayers are recited, and Jews celebrate each new month.

THE MONTHS OF THE JEWISH YEAR

This section of our website has the following pages:

‘How the Jewish Calendar Works’. This video starts by explaining how the secular calendar (which is a solar calendar) and the lunar calendar work, then explains how and why the Jewish calendar is different from them.

Understanding the Jewish Calendar by Nathan Bushwick is an excellent introduction explaining how the system of the Jewish calendar works.

The Comprehensive Hebrew Calendar is an invaluable reference for those needing to convert English dates to Hebrew or back. It is especially useful for calculating things such as when a child’s Bar or Bat Mitzvah may be held. Covers a 200 year period from 1900 to 2100.