Tu biShvat literally means the 15th day of the Hebrew month of Shvat (sometimes spelt as ‘Shevat’ in English). Tu biShvat is the Jewish New Year of the trees, falling at the time when most trees in Israel begin to bud. There is no mention of Tu biShvat in the Bible, hence it is a minor holiday as it is a rabbinic enactment. Tu biShvat falls during the secular months of January or February.

Tu biShvat  has relevance in Jewish law because as it marks the date of all annual tithes on fruit in Eretz Israel (the Land of Israel). Our observance of the holiday also expresses our close ties to the Holy Land. 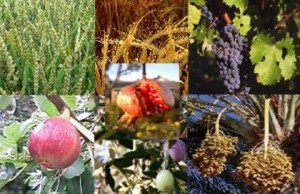 The ‘Seven Species’ of natural produce (listed in Deuteronemy 8:8) are particularly associated with the land of Israel.

On Tu biShvat Jews would put fruits on their table for which the land of Israel was and is legendary, and which were brought to the Temple in Jerusalem: raisins (grapes), olives, figs, dates, pomegranates and the grains (wheat and barley) which make up the seven species of the land. Eating these sweet fruits helped to take away some of the bitterness of the Jews’ life in exile and served as a reminder that Israel was waiting for their return.

As it is written in  Devarim (Deuteronomy) 8: 7-8, “For the Lord God will lead you into the good land, a land flowing with waters… A land of wheat and barley and vine, of fig and pomegranate, the land of the olive and [date] honey”.

Today, Tu biShvat is not only a day when fruits from Israel are eaten, but also a day when Jewish people plant trees, as it is written in Vayikra 19:23, “And when you shall enter this land (Israel), you shall plant fruit-bearing trees”.

This idea is amplified in Vayikra Rabba 25: “The Holy One, blessed be He, occupied Himself with planting immediately after Creation of the world. For it is specifically written: ‘And the Lord God planted a garden in Eden’. So shall you also, when you enter the land of Israel, first of all occupy yourself in planting.”

HOW DO WE CELEBRATE TU BISHVAT?

A very important custom of Tu biShvat is eating fruits for which Israel is known. As well as the seven species (mentioned above) we eat other fruits associated with Israel, in particular almonds, citrus fruits, and apples.  According to the Jewish mystical tradition (Kabbalah), eating fruit is a pathway to spiritual improvement.

Tu biShvat relates to the cycles of the seasons in Israel and is also known as “the birthday of the trees”. In Israel at this time children take shovels and hoes, and go singing happily to plant trees. They have parties when they have finished, where they sing more songs, eat fruit and dance around the trees.

In the Diaspora (countries outside of Israel) Jewish people plant seeds or trees where we live, or send money to Israel for people there to plant trees for us. 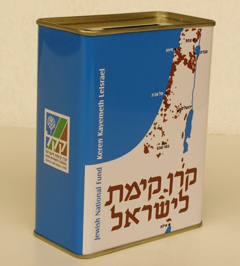 The JNF has traditionally raised funds by getting Jewish homes to have a ‘blue box’, a charity box into which they place coins as a donation to the JNF.

The Jewish National Fund (JNF) is called Keren Kayemet leYisrael in Hebrew. It is the largest foundation within the Zionist movement and its primary aim since 1901 has been to acquire land in Israel for settlement and reafforestation. Jewish people have fostered tree planting and environmental programs in Israel as an expression of their commitment to the land since the JNF was founded.

On Tu biShvat in 1949 a memorial was held for those who had fallen in the War of Independence. Then Prime Minister, David Ben-Gurion, planted the first tree. The Knesset (Israeli parliament) celebrates its own birthday on Tu biShvat, as the date marking its first session.