What is Hoshana Rabbah and When Do We Celebrate It? 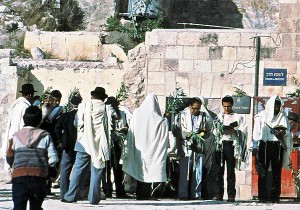 Hoshana Rabbah falls on the 21st of Tishrei, the 7th day of Sukkot and the last day of Chol haMo’ed Sukkot (the intermediary days of the festival of Sukkot). The name is Aramaic rather than Hebrew and means ‘the great Hoshana’, with Hoshana being the name of a supplicatory prayer said during the festival of Sukkot (in English this prayer is known as Hosanna).

Hoshana Rabbah is considered a particularly important day in the Jewish calendar because, although Jews believe that God makes up His mind about a person’s fate during the coming year and seals the decree on Yom Kippur, they also believe that the decree is not delivered until Hoshana Rabbah, hence there is still an opportunity for a change of mind until then. This belief stems from the Zohar, a kabbalistic (mystical) Jewish text and the customs of Hoshana Rabbah originate from the same source.

On the evening of Hoshanah Rabbah, it is traditional to recite Tehillim (the Book of Psalms) and to read Sefer Devarim (the Book of Deuteronomy). In some circles, especially Hassidic circles, men stay up the entire night engaged in religous study.

On other days during Sukkot, men carry a lulav and etrog whilst walking a circuit around the synagogue; this circuit is known as a hakafah (plural: hakafot). On Hoshana Rabbah, seven hakafot are made whilst saying Hoshanot (prayers for deliverance). Each of the hakafot is done in honour of one of the ushpizin (seven honoured guests who are imagined to join families in their sukkah during Sukkot) – Abraham, Isaac, Jacob, Moses, Aaron, Joseph and David. After completing the hakafot and saying Piyyutim (a number of liturgical poems), it is traditional to pick up a bundle of five willow twigs and beat them on the ground whilst reciting further prayers exressing hope that the Messiah will come soon. There are a number of kabbalistic (mystical) explanations for the custom of beating the willow twigs including that it represents the elimination of sin.