All About the Four Species 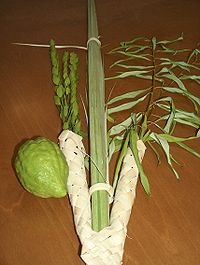 A set of the 4 species, including a particularly green looking etrog (the fruit resembling a bumpy lemon)

The Arbah Minim (‘Four Species’) are 4 plant species which are used ritually as part of the observance of the festival of Sukkot. Three of the species (the palm, willow and myrtle) are placed in a special plaited holder and collectively are known as a ‘lulav’; the 4th of the four species, the fruit of the citron tree which is known in Hebrew as an etrog, is held together with the lulav. 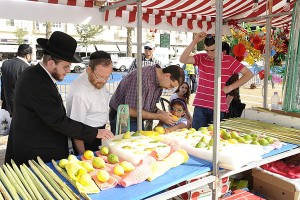 It is a mitzvah (commandment) to shake or wave the Four Species on each of the seven days of Sukkot, usually before or during the Morning Service. This shaking or waving of the Four Species is symbolic of the completion of the yearly cycle, of freedom, and of peace and harmony. We shake the lulav in every direction to indicate God’s presence throughout the world, while facing east towards Jerusalem.

How to buy and care for the Four Species 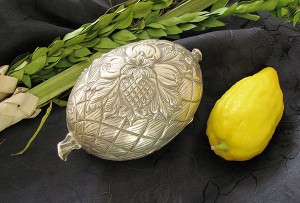 An etrog with a protective case in which to transport and store it.
Protective cases for etrogs are available in a variety of designs and materials.

The principle behind buying the Four Species is called hiddur mitzvah, which translates as commandment of beauty, ensuring absolute perfection in each one.

* the citron (etrog in Hebrew) is a type of citrus fruit not found in Australia (although Australian Jews specially import a supply of citrons just prior to each Sukkot for use during the festival) – it is usually described as looking like a large, bumpy lemon, but its taste and fragrance is quite different to that of a lemon.