What is Sukkot and when do we celebrate it? 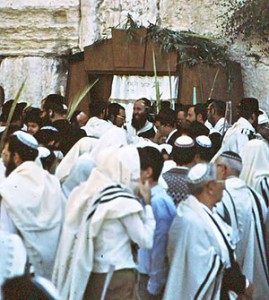 Jewish men at the Western Wall (Kotel) during the festival of Sukkot.

‘Sukkah’ is the Hebrew word for ‘booth’ or ‘tabernacle’. ‘Sukkot’, the plural, is the name of the festival of booths. It refers to the huts in which the Israelites dwelled during their years in the desert after leaving Egypt.

Sukkot marks the end of the High Holydays, with their serious focus on repentance. It is therefore a joyous festival, one of the Three Pilgrim Festivals.

Sukkot begins two weeks after Rosh Hashanah, on the eve of the 15th day of Tishrei, and is observed for seven days, until the 22nd Tishrei.

During Sukkot we recall events connected with our liberation from Egypt. After our ancestors left Egypt, they wandered for forty years in the desert before they reached the Promised Land of Israel. Along their way during these forty years, they constructed temporary homes out of dry palms and branches.

To remind us of their journey and these temporary dwellings, on Sukkot we ‘dwell’ for seven days in huts made from branches and palms. (For most people this consists of eating their meals in the sukkah, but more religious males often also sleep in the sukkah.)

Sukkot was also originally one of the ancient harvest festivals. After our ancestors had arrived in the land of Israel, they realised that Sukkot fell in Autumn, a time when they gathered the crops from the fields and the fruits of the orchards.

These harvests were traditionally celebrated with great excitement. As a result, Sukkot is also referred to as ‘Chag HaAsif’ (‘The Festival of Gathering’) and ‘Zman Simchatenu’ (‘The Time of Our Happiness’).

How do we celebrate Sukkot? 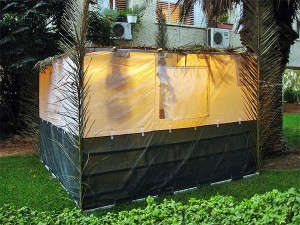 A typical modern-day sukkah in the back yard of a home.

The traditional timeto build a sukkah is immediately following the end of Yom Kippur. However, a sukkah may be built at any time provided that it is finished before the festival of Sukkot begins.

A sukkah has to have at least three walls, one of which needs to only be 15cm wide. The walls of the sukkah can be made out of anything: canvas, wood, bricks, even metal or stone. They may even be a permanent construction – thus many people use a side of their house as one wall of their sukkah.

There are, however, certain rules pertaining to the roof of a sukkah: 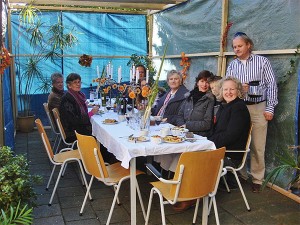 Inside a typical sukkah.

Dwelling In A Sukkah

We are commanded to ‘live’ in a sukkah for the whole week of Sukkot. This means that we should try to take all our meals in the sukkah and say the blessings for bread, wine, and a prayer that offers thanks to God for Sukkot. Some people also sleep in their sukkah during Sukkot (weather permitting).

During Sukkot, it is a great (and very enjoyable) mitzvah to invite guests over to eat with you in your sukkah.  Guests are called ‘ushpizin’ in Hebrew and tradition tells us that our Sukkot visitors symbolically include Abraham, Sarah and our other Jewish ancestors. 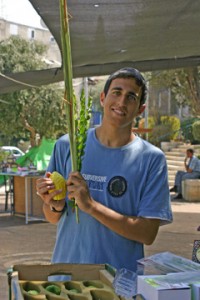 A man at an Israeli street stall deciding which lulav set to buy. (Photo reproduced here with the kind permission of Alex Ringer, Israel.)

On Sukkot we make symbolic use of four kinds of plants known in Hebrew as the Arbah Minim (Hebrew for ‘Four Species’). These are said to represent the unity of Israel, the final harvest and the fertility of the land. They are:

The three myrtle twigs and the two willows are tied together to the palm branch and together the entire bouquet is called the lulav.

A meditation is read before a blessing for the lulav is recited. The etrog is then held in the left hand (stem – pittam – pointed downwards, then after the prayer, turned upwards), the lulav in the right hand.

We then shake the lulav in every direction to indicate God’s presence throughout the world, while facing east towards Jerusalem. It is shaken five in five directions – three times forward, three to the right, three back over the right shoulder, three to the left, three up and three down. We wave the lulav as a sign of joy and gratification for God’s provision of a final harvest. The waving of the lulav also represents the land’s fertility and the desire for rain in Israel.

We also wave the lulav during Hallel (psalms of praise).

Each person should have their own lulav – it cannot be borrowed, but it can be given as a gift.

For more information about the Four Species and their use during Sukkot, click here.

Chol Ha-Mo’ed are the four days that follow the first two festival days of Sukkot. During the morning service in synagogue, Hallel prayers are recited and a procession takes place with the lulav and the etrog.

On the first night of Chol HaMo’ed we observe the ceremony of the ‘Water Libation’. This recalls a ceremony performed in the Holy Temple, using water drawn from the pool of Siloam near Jerusalem.

It is believed that the Water Libation ceremony was originally a protest by the masses against those who believed that the more expensive the sacrifice, the more acceptable it would be to God. The ceremony evolved to show that it was the meaning and intention (kavanah) behind any sacrifice which made it valid, not the worth of the actual sacrifice itself.

The seventh day of Sukkot is called ‘Hoshanah Rabbah’, which means ‘the great help’.

On Hoshana Rabbah the decrees of Yom Kippur are finalised, so it is customary to spend the night preceding it in prayer and study.

On the day of Hoshanah Rabbah in the synagogue we walk around the bimah in a procession, carrying the lulav and etrog. While walking, we recite prayers for a good harvest. Seven circuits are made, after which five aravot (bundles of willows) are bound together and beaten on the ground.

Links to Other Sites & Pages about Sukkot