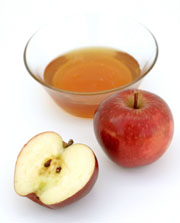 On Rosh HaShanah it is customary to eat apples dipped in honey. The apples remind us of the roundness of the year and the hope that the coming year will be fruitful, and the honey represents the wish for a sweet year. It is also custmary to dip challah (the special bread used on Shabbat or a holyday) in honey rather than in salt (as is done during the rest of the year) in the hope that the new year will be just as sweet as the honey.

On the second night of Rosh HaShanah a fruit that has not yet been eaten recently is eaten. In addition to the blessing over fruit we say the “Shecheyanu” blessing, the one we recite for new things.

Often a fish head is eaten, accompanied by a blessing saying “May we be like a head (leader) and not a tail (follower)”, or that “We will be fruitful and multiply like fish”. Fish are so numerous that they are often used as a symbol of fertility and prosperity.

Specially-shaped challah is eaten instead of the usual plaited challah (bread) that we eat on Shabbat. The challah eaten on Rosh Hashanah is either round to signify a long life span and a smooth, even year, or (less commonly) in the shape of a ladder to signify our journey upwards to talk to God. Challah for Rosh Hashanah is often made with either a sweet dough, or sweet fruit like raisins baked into it. 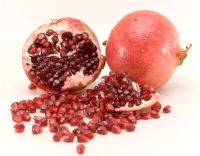 A pomegranate is said to have 613 seeds, which is the number of mitzvot (commandments or good deeds) in the Torah. We eat pomegranate on Rosh HaShanah to show our hope that we will perform all the mitzvot of the Torah during the coming year.

Sweet carrots, cooked with sugar, raisins or prunes are served with the Rosh HaShanah meal, again in the hope of a sweet year. 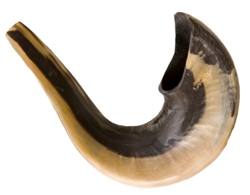 The shofar is the single most important symbol of Rosh HaShanah. It is a horn or trumpet made from the horn of a kosher animal (but not from a cow which is associated with the sin of the Golden Calf) and is sounded on both days of Rosh HaShanah, but not if it is also Shabbat (it sometimes happens that one day of Rosh HaShanah conincides with Shabbat). For detailed information about the shofar, see: The Shofar. Also: Why we sound the Shofar.

It is customary to wear white on Rosh HaShanah because white symbolises purity and our desire to be close to God.  A white robe also reminds us of the white robes worn by angels. In synagogue some religious men wear a white robe called a ‘kittel’ over their regular clothes. 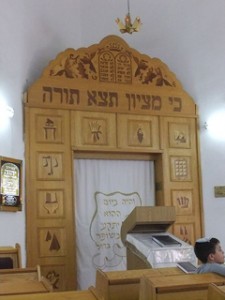 White in the synagogue

The curtain across the ark is changed to a white one and the Torah covers are changed to white. This is to show that “our mistakes will be whitened like snow.”

A lovely custom is to send Rosh HaShanah cards to wish one another a sweet and happy year. A common greeting on Rosh HaShanah is: “Leshanah tovah tikateivu” – “May you be inscribed (in The Book of Life) for a good year”.

During the afternoon of the first day of Rosh HaShanah (or the second if the first falls on Shabbat) it is a custom to perform a ritual called tashlich (‘casting’).  Religious Jews go to the bank of a river, lake or the beach and recite brief prayers containing a reference to the forgiving God who “casts our sins into the depths of the sea”.   Then they symbolically throw their sins into the water.