The Scroll of Esther – ‘the’ Megillah or Megillat Esther 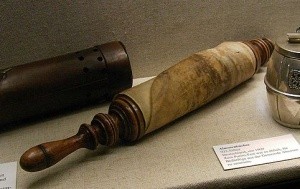 A Scroll of Esther, rolled up. Unlike a Torah Scroll,
it has only one binder.

The Megillah, also known as Megillat Esther or the Scroll of Esther, tells the story of Purim as told in the Bible in the Book of Esther. The copy of the story read in synagogue is written on parchment and must be on a single sheet. It need not be bound, but is usually kept in a wooden binder. It is common for Megillah scrolls to have colourful elaborate designs and decorations on them. There is no risk of mocking God in doing so, because the Megillah is the only book in the Bible that does not mention God’s name.

Because Purim is a joyous festival, the Megillah, in line with the rest of the Purim activities, is often performed and sung in an entertaining manner. In an Orthodox synagogue, a traditional tune is maintained throughout the reading and a special voice may be put on for each character when he or she speaks. The verses from Esther 1:7, 3:15 and 7:4 are all sung to the tune for Lamentations. Then the congregation reads verses 2.5 and 8.6 out loud. In some congregations the reading of the Megillah is extremely informal. 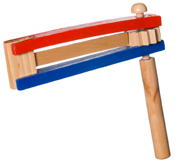 A traditional wooden gregger or noise-maker used on Purim to block out the name of Haman when it is read in the Megillah.

Every time Haman’s name is mentioned during the reading, the congregation must block it out, by making noise. A traditional toy used for making a noise to stamp out Haman’s name with is called the raashan or gregger.

YouTube – Purim 2012 Young Israel Bayswater, New York (Megillah Reading). Video of the introductory blessings and reading of the first part of the Book of Esther on Purim. Shows congregants in fancy dress for the holiday of Purim, congregants following the reading and also making noise when Haman’s name is mentioned (note that Haman’s name is not mentioned until early in chapter 3).

YouTube – Lego Purim. A video by Aish Hatorah telling the story of Purim which is contained in the Megillah.