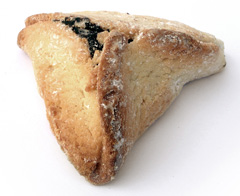 This is probably the most popular food eaten on Purim. It is a triangular, three-cornered pastry that is usually filled with either a poppyseed mixture or jam, although some people also use a cream cheese filling. There are a number of speculations about the shape and name of Hamantashen:

The BJE Webmistress’s Best Ever Hamantashen Recipe, by popular demand

Beat eggs until thick. Then beat in sugar, oil and vanilla essence. Fold in flour and baking powder until it becomes a workable dough. Flour your surface and roll out in batches. Use a drinking glass to cut out rounds. Put a teaspoon of jam or other filling in the centre of each round, then pinch up so that there are 3 corners and the filling is concealed. Place on a greased tray, brush with beaten egg and bake till just brown in a 180-degree oven (180 degrees Celsius = 350 degrees Fahrenheit). Cool and serve, remembering to make enough to include in Mishloach Manot for all your friends!

Fish that is eaten on Purim is cooked with spices, raisins and vinegar. These flavourings remind us of the taste of food in Persia and are very different from what we eat on other festivals. 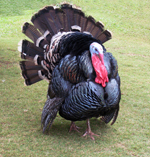 Some people eat turkey on Purim to remind them of King Achashverosh. The turkey is considered a foolish animal, and the reference is to Achashverosh’s foolishness in taking the counsel (advice) of Haman. Another reason is that we are told at the beginning of the Scroll of Esther that King Achashverosh reigned ‘from India (‘Hodu’ in Hebrew) to Ethiopia (‘Kush’ in Hebrew)’. As hodu is also the Hebrew word for a turkey, the custom of eating turkey on Purim developed.

Beans, cereals and seeds made up the bulk of Queen Esther’s diet in the palace. She ate these and followed a vegetarian diet to avoid eating non-kosher meat and other foods, thus maintaining her Jewish observance. We eat these foods on Purim in memory of her piety.