WHAT IS YOM YERUSHALAYIM AND WHEN DO WE CELEBRATE IT?

Yom Yerushalayim, Jerusalem Day, falls on 28 Iyar. It commemorates what is, in our era, without doubt the most noble moment in the historic love between Jews and Jerusalem: the liberation of the Old City of Jerusalem and the reunification of all Jerusalem during the Six Day War, on the 28th of Iyar 5727. 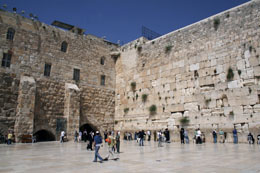 Since the re-unification of Jerusalem,
it has been possible to access and pray at
the Western Wall, the last remaining part of the Temple complex which stood in ancient Jerusalem.

In 1967, on 5th of June (28 Iyar 5727), nineteen years after the establishment of the State of Israel, the surrounding Arab leaders set out (again) to destroy Israel and sent forces to the north, east and south. In addition to this, Egypt blockaded the Straits of Tiran, preventing Israel from using the port of Eilat.

The Israeli Defence Forces (IDF) protected the Land of Israel, and in a war that lasted 6 days, they destroyed the enemies in The Sinai Desert, Golan Heights, Judea and Samaria. The highlight of this victory was the capture of The Old City of Jerusalem including the Temple Mount where the Kotel (‘Western’ or ‘Wailing’ Wall, the last remaining part of the ancient Temple in Jerusalem) stands. Previously this had been in Arab East Jerusalem under Jordanian rule and Jews had not been allowed to visit it.

When the war broke out in the Sinai, it did not seem that Jerusalem, the Holy City, would be involved. But a few short hours after the outbreak of the war, the Kingdom of Jordan, which since 1948 had occupied the Old City, began to shell houses in the Jewish New City.

At first, Israel did not respond to the Jordanian shelling. But as the hours passed, the shelling increased in its intensity. Then the forces of the Jordanian army invaded and took possession of Government House, the headquarters of the United Nations Truce Supervision Organisation.

Faced with a serious Jordanian offensive threatening New Jerusalem and the lives of its inhabitants, the IDF moved against Jordan. Thus, unexpectedly, Jerusalem became not only a part of the war, but actually its focus.

After two days of heroic battle, the IDF entered the Old City through the Lions’ Gate, and marched to the Western Wall and the Temple Mount. For 2,000 years after the destruction of the Temple by the Romans, the City of David had been occupied by one foreign power after another. Exiled Jews in every generation pledged in the words of the Psalm (132:5 – 6), “If I forget thee o Jerusalem, let my right hand forget her cunning …. .if I prefer not Jerusalem above my chief joy.”

Jerusalem had not been forgotten: the Jews had returned. For almost 20 years, Jerusalem had been unnaturally divided. Jordan, despite its original promises, had denied Jews access to the Old City, and had desecrated Jewish holy places. Now Jerusalem was united under Israeli control.

The profound significance of the liberation of Jerusalem transcends the military, the political, the nationalistic, and the sentimental. Indeed, the Chief Rabbinate of Israel has ruled that each year, on the 28th Iyar, the Hallel be recited – with the following blessing:

For the liberation of Jerusalem carries with it the hope that the prophetic vision of Jerusalem shall soon be realised. This is the sacred vision of true peace and true love, the most sublime vision of mankind. It is the vision expressed in the words of Isaiah (2:1 – 5): The mountain of the House of the Lord shall be established…and all the nations shall flow to it, and many people shall come and say: “Let us go to the mountain of the Lord…that He may teach us His ways…” For out of Zion shall go forth the Torah, and the word of the Lord from Jerusalem….And they shall beat their swords into plowshares, and their spears into pruning hooks; nation shall not lift up sword against nation, neither shall they learn war any more.

HOW DO WE CELEBRATE YOM YERUSHALAYIM?

On Yom Yerushalayim special prayers and readings are said in synagogues around the world. In Israel, there are national ceremonies (especially at the Western Wall and Ammunition Hill). There is a march through the City of Jerusalem and places of entertainment around Israel’s city centres.

‘Jerusalem: 4,000 Years in 5 Minutes’ by The Jerusalem Center

‘Jerusalem Within These Walls’ by National Geographic:

A song traditionally sung every year at the Seder on Pesach (Passover) is L’shanah ha’ba’ah birushalayim (‘Next year in Jerusalem’), a song which expresses the Jewish longing for Jerusalem, the spiritual home of the Jewish people: