What is Yom HaAtzma’ut and when do we celebrate it?

The name ‘Yom HaAtzma’ut’ means ‘Independence Day’. On the fifth of Iyar, 5708, which corresponded with the 14 May 1948, the Provisional State Council proclaimed the State of Israel. Yom HaAtzma’ut is a national holiday in Israel and is also celebrated by Jews around the world. 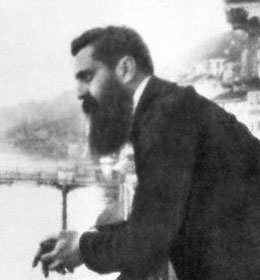 Theodor Herzl (1860-1904), a Hungarian Zionist leader who is considered to have been founder of the political Zionist movement, is shown looking thoughtfully from a bridge or pier in this undated photograph.

Jews have lived in the Land of Israel for nearly 4000 years, going back to the period of the Biblical patriarchs (c.1900 BCE). The story of Jewish life in ancient Israel is recorded in detail in the Hebrew Bible (called the “Old Testament” by Christians).

The dispersion of the Jewish people is traditionally dated from the destruction of their Temple in Jerusalem. In the ensuing years the greater part of the Jewish population went into exile as captives, slaves and refugees, although Galilee remained a centre of Jewish institutions and learning until the sixth century CE. Through the centuries of their exile, the hope for redemption of the land of Israel remained a focal point of the Jewish religion and national identity.

Religious Zionism therefore remained a constant for the two thousand years from the time of the exile. Political Zionism, which aimed to restore a Jewish homeland in Palestine, only emerged as a movement in Europe during the 19th century. In 1897 journalist Theodore Herzl convened the first Zionist Congress at Basel in Switzerland. The congress comprised 204 representatives of Jewish communities and created the World Zionist Organisation.

In 1882 the first of the modern Zionist waves of immigration began. These immigrants established agricultural settlements under conditions of severe hardship, and were generally dependent on the support of Jewish philanthropists. There was a second wave of immigration in 1904 after further persecution in Russia. By 1914 the Jewish population of Palestine was approximately 85,000 in a total population of approximately 650,000. 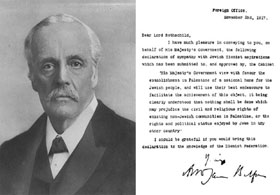 The Balfour Declaration and its author, Lord Balfour.

On 2nd November 1917, one month before WW1 British troops under General Allenby entered Jerusalem, the British Government made the following declaration in a letter from Lord Balfour, the British Foreign Secretary, to Lord Rothschild, president of the British Zionist Federation:

“His Majesty’s Government view with favour the establishment in Palestine of a national home for the Jewish people, and will use their best endeavours to facilitate the achievement of this object, it being clearly understood that nothing shall be done which may prejudice the civil and religious rights of existing non-Jewish communities in Palestine, or the rights and political status enjoyed by Jews in any other country.”

After the Balfour Declaration the Jewish population in Palestine increased. More Jewish immigration followed waves of persecution in central and eastern Europe, and increased dramatically after the accession of Hitler in 1933. During the Second World War, six million Jews were exterminated in Europe in conditions of calculated atrocity unique and unprecedented in world history. One lesson was clear: in times of severe crisis in any country, no outsider is safe. The survival of the Jewish people depended on the existence of a national territory and a capacity for self-defence.

After the war, however, Britain was anxious to consolidate its Middle East interests. Priorities included control of oil supplies and maintenance of the sea route to the Persian Gulf and the Far East, all of which required Arab friendship. As a result, the British White Paper policy of severe restrictions on Jewish immigration continued.

Nevertheless, Jewish survivors in the Displaced Persons Camps of Europe demanded to go to Palestine. Illegal immigration by desperate survivors in chartered boats, often barely seaworthy, increased in scale, and those who were unsuccessful in avoiding the British Navy were put into camps in Cyprus and Mauritius, or returned to Europe. British troops were shipped to Palestine to meet the growing Jewish resistance.

Attempts to settle matters failed. In 1946 an Anglo-American Committee of Enquiry called for the immediate entry into Palestine of 100,000 survivors. In 1947 the British agreed to intervention by the newly formed United Nations, and a United Nations Special Committee on Palestine (UNSCOP) was established.

After taking evidence, UNSCOP recommended the partition of Palestine into a Jewish state and an Arab state in economic union (each state consisting of three segments), and an internationalized Jerusalem. On 29th November 1947, a resolution was passed by a two-thirds majority of the General Assembly. There was now an international charter for the creation of the State of Israel.

The Jews accepted the partition plan with celebration in the streets. The Arabs denounced the plan and refused to set up a provisional government for the proposed Arab state. Britain announced that it would not co-operate in the actual execution of the partition plan, and would withdraw its forces on 15th May 1948.

Arab hostilities began immediately in the form of a general strike, widespread rioting, and attacks on Jews throughout the country. Armed Arab forces appeared, the largest being the Arab Liberation Army. 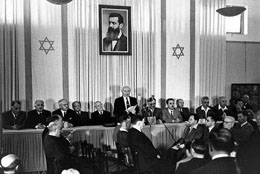 David Ben Gurion declares the establishment of the independent State of Israel on 14 May 1948.

On 14th May 1948 the British flag was lowered and the Declaration of the Establishment of the State of Israel was proclaimed. It included the following words:

We appeal in the very midst of the onslaught launched against us now for months to the Arab inhabitants of the State of Israel to preserve peace and participate in the up-building of the State on the basis of full and equal citizenship and due representation in all its provisional and permanent institutions.

We extend our hand to all neighbouring states and their peoples in an offer of peace and good neighbourliness, and appeal to them to establish bonds of co-operation and mutual help with the sovereign Jewish people settled in its own land. The State of Israel is prepared to do its share in common effort for the advancement of the entire Middle East.

That night Tel Aviv was bombed by Egyptian planes. The next morning units of the regular armies of Syria, Trans-Jordan, Iraq and Egypt, with volunteers from Saudi Arabia and the Sudan, crossed the frontiers. It was the beginning of the war described by Israel as the War of Independence, and by the Arabs as Al Nakhba, “The Disaster”. 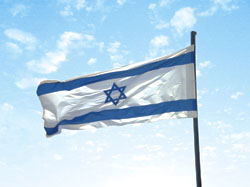 The flag of Israel.

Israel’s flag was originally designed for the Zionist movement’s First Congress by David Wolffsohn. The elements chosen were the colours blue and white, to represent the tallit or prayer shawl, and theMagen David (Star of David) which had long been used as a Jewish symbol.

The national anthem of the Zionist movement was already HaTikvah meaning “The Hope”. This song was the natural choice to become the anthem for the new State of Israel.

Its words, written by Naphtali Herz Imber and the tune, based on a Russian melody, express the hope of returning to Zion. The song concludes “Our hope is not forgotten, the hope of 2,000 years. To be a free people in our own land, the land of Zion, Jerusalem.”

How do we celebrate Yom HaAtzma’ut?

The rabbinate of Israel considers Yom HaAtzma’ut to be a minor festival that is to be celebrated at home as well as in the synagogue.

At sunset on the eve of Yom HaAtzma’ut, twelve torches are lit on Mount Herzl in Jerusalem. The twelve torches are symbolic of the twelve tribes of Israel. There is a gun salute (consisting of one salvo for each year of independence). Parties are held throughout the country. There is dancing in the streets, fireworks and outdoor entertainment. People decorate their homes with lights and Israeli flags.

In the Diaspora, Jews celebrate this day by having special Yom HaAtzma’ut services in most synagogues and schools. It is customary in Jewish schools for children to come to school dressed in blue and white, the colours of the Israeli flag.