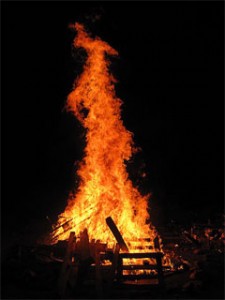 Bonfires are often lit in celebration of Lag baOmer.

Lag B’Omer is celebrated on the 18th of the Hebrew month of Iyar, which is the thirty-third day of counting the Omer. In ancient times, Hebrew letters were also used as numbers and the number 33 was written with the Hebrew letters lamed and gimmel, hence the name ‘Lab baOmer’ which literally means ’33 in the Omer’.

Rabbi Akiva, who witnessed the destruction of the Second Temple, was the greatest Torah sage of his generation. On Lag B’Omer we recall that 24,000 of his disciples died in an epidemic – this was a problem not only because of the loss of life, but also because his students were the future (religious) leadership of the Jewish people. This sad event and others took place during the Counting of the Omer.  However, on the thirty-third day of this Omer Period, his students stopped dying because of the epidemic.

Lag baOmer also marks the ‘yahrzeit’ (death anniversary) of Rabbi Shimon Bar Yochai, who was a student of Rabbi Akiva.  On this day it is said that Rabbi Shimon revealed fundamental teachings of the Zohar (the key text of Jewish Mysticism).

Lag B’Omer has become a day of joyous celebration.

The events commemorated on Lag baOmer occurred about 2,000 years ago, during the period when the Romans governed Palestine and the Jews were forbidden to study Torah or practise any form of Judaism.

Despite this prohibition, Rabbi Akiva was determined to keep the study of Torah alive. (Before becoming a rabbi, Akiva was a poor shepherd who married a woman named Rachel. She convinced him to study and consequently, he became a very learned and well-respected rabbi). Rabbi Akiva told his students to dress up as hunters and pretend they were going hunting (with bows and arrows). When the Romans saw them, they would think nothing of it. The students, however, would go to a cave deep in the woods and there they would study Torah with Rabbi Akiva.

Shimon Bar Yochai was one of Rabbi Akiva’s leading students. He was an activist against the Romans and is believed by many to be a major contributor to the Zohar. Rabbi Shimon endured terrible persecution to ensure that the Torah would not be forgotten in the difficult time of the Roman occupation.

When the Romans outlawed the study of Torah, Rabbi Shimon spoke out against them. The Romans thus pronounced a death sentence against him, and he was forced to go into hiding. 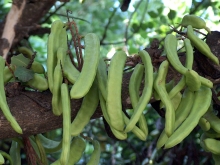 Rabbi Shimon and his son Elazar fled to a cave in the northern region of Israel. They had no means of subsistence, but a miracle occurred and a carob tree sprouted in the cave, along with a stream of water.

Rabbi Shimon and his son had no change of clothes. In order to preserve their clothes from wearing out, they each dug a deep hole, removed their clothes and buried themselves neck-deep in the sand (out of modesty, they wanted to be covered.) They would spend the entire day studying Torah in this way. When the time for prayer arrived, they would put on their clothes, pray and then return to the sand.

Rabbi Shimon and his son remained in the cave for 12 years, involved in nothing but the study of Torah. Finally, Elijah the prophet came to the cave and announced that the Caesar had died, and the decree against Rabbi Shimon was lifted.

Rabbi Shimon became the greatest Torah teacher of his generation. When he reached the final day of his life, he called together his students and spent the entire day in a prophetic stream of consciousness, revealing the deepest mystical secrets of Torah.

Rabbi Abba said, “The entire day the house was filled with fire, and nobody could get close due to the wall of fire and light. At the end of the day, the fire finally subsided, and I was able to look at the face of Rabbi Shimon: He was dead, wrapped in his tallit, lying on his right side…and smiling.”

But if Lag baOmer marks the date of Rabbi Shimon’s death, why is it such a celebration?  The Romans had convicted Rabbi Shimon of a capital crime. By all rights, he should have died well before his time. But through tremendous self-sacrifice (hiding in the cave) and a series of miracles (the carob tree and the stream), Rabbi Shimon was able to live out a full life. The climax of this great life was the revelation of Torah’s greatest inner secrets. All this is cause for celebration for Jews.

How do we celebrate Lag baOmer?

To celebrate Lag baOmer, Jews around the world light bonfires, to commemorate the great fire that surrounded Rabbi Shimon. In Israel, for weeks before, children scavenge wood to arrange as impressive sculptures. Great public celebrations are held and the wood towers are burned on Lag baOmer.

Lag baOmer is also day of pilgrimage to the tomb of Rabbi Shimon in the Galilee town of Meiron. In one day, an estimated 250,000 Jews visit Meiron, dancing, praying, and celebrating the wonderful spiritual gifts that Rabbi Shimon bequeathed to us. Some people camp out for weeks beforehand in anticipation.

Another tradition often associated with Lag baOmer is the giving of a haircut to boys who have turned 3 years old. Some Jews, notably Chassidic Jews (who have a particular regard for the Kabbalah, or mystical traditions of Judaism), have the custom of not cutting their son’s hair until he is 3 years old (the hair is compared to the fruit of a tree which the Torah prohibits us to pick until the tree is 3 years old). Lag baOmer occurs during the Omer period when haricuts are not permitted except on Lag baOmer because it is a joyous occasion. Thus, by Lag baOmer, there is a backlog of boys who have turned 3 during the preceding 4 1/2 weeks (when the counting of the Omer, and hence the restriction on haircuts, began). As a result, a large number of 3 year old boys have their first haircut on Lag baOmer.