What is the Omer Period and why do we observe it? 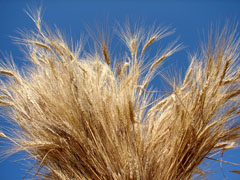 In Temple times, a sheaf of barley was brought to the Temple in Jerusalem each day starting on 2nd Day Pesach and continuing for 49 days until Shavuot.

An omer was a measure of barley which was brought to the Temple as an offering on the second day of Pesach (Passover). This marked the beginning of the harvest season. It is written in the Bible:

“When you enter the land which I am giving to you and reap its harvest, you shall bring the first sheaf of your harvest to the priest the priest shall wave it on the day after the Sabbath.”

God told the Jews to bring an offering of their first harvest to the Temple, and He would then show concern for the rest of their grains.

“From the day that you bring the sheaf offering, you shall keep count until seven full weeks have elapsed; you shall count 50 days until the day after the seventh week (Shavuot); then you shall bring an offering of new grain to the Lord.”

So, from the day of the offering, we are instructed to count 49 days until the festival of Shavuot (Feast of Weeks). This seven-week interval is called the Omer (more formally it is called Sefirat haOmer or ‘the Counting of the Omer’). The practice of bringing a sheaf of barley to the Temple was discontinued following the destruction of the Second Temple; however, the counting of the Omer (Sefirat Ha’Omer) and the celebration of Shavuot continue to this day.

The 33rd day of the Omer is called Lag B’Omer and it is a day of exemption from mourning.  Two events are thought to have occurred on Lag B’Omer; the first a cessation of the plague affecting Rabbi Akiva’s students and second, it is the day that the revolutionary Bar Kochba succeeded in driving the Romans out of Palestine in 132 C.E.

How do we observe the Omer Period?

The period of the Omer is one of semi-mourning. One of the reasons given for this is that in Second Temple times many of Rabbi Akiva’s students died during this season either from a plague or because they were killed by the Romans. This period also reminds us that we should try improve our behaviour so that when we receive the Torah (on Shavuot), we will be ready. Hence, we are prohibited from doing certain things, such as:

Modern Holydays during the Omer Period

The period of counting the Omer (Sefirah haOmer) runs from 16 Nissan, the 2nd day of Pesach (Passover), to 5th Sivan (the day before Shavuot). In modern times, since the founding of the State of Israel in 1948, a number of additional holydays during this period have been instituted by the rabbis. These holydays are:

The last two are festive celebrations and considered to be exceptions to the general rule of mourning in the period of Sefirat haOmer. However, since all four of these days were instituted by the rabbis (and are not decreed in the Torah), none of the restrictions of yom tov apply to them and one may engage in activities such as driving cars or using computers on these days.

The counting of the Omer begins on Second Day Pesach during the Ma’ariv (evening) service.  The passage from Vayikra (above) is read, followed by the benediction:

“Blessed are You, Adonai our God, Ruler of the Universe, who has hallowed us with your commandments, and commanded us concerning the Counting of the Omer.”

Thirdly, we announce the number of weeks that have passed since the start of the count. For example, “Today is the twelfth day making one week and 5 days of the Omer.”

Links to Other Sites & Pages about Sefirat HaOmer

Chabad: The Omer Count – 49 Steps in Self Refinement

Judaism 101: The Counting of the Omer

Virtual Jewish Library: Lag b’Omer and the Counting of the Omer