‘Tisha b’Av’ means ‘the 9th of Av’ (a month in the Jewish calendar). It is a major fast day and marks the end of the Three Weeks, a period of semi-mounring. On Tisha b’Av we remember a series of catastrophes which have befallen the Jewish people since ancient times.

Several major tragic events of Jewish history have occurred on the 9th of Av, Tisha B’Av, including the destruction of both the First and the Second Temples in Jerusalem.

1312 B.C.E. After the exodus from Egypt, while the Jews were wandering in the desert, 12 spies were sent to report on the ‘promised’ land ahead, the land of Israel (Canaan). 10 of them returned on the 9th Av with negative reports. Their lack of faith caused God to condemn all of their generation (except for the two spies who brought back favourable reports of the land) to die out in the desert rather than live to enter Israel.

586 B.C.E. The First Temple was destroyed on the 9th Av by the Babylonians under King Nebuchadnezzar. (Many Jews were subsequently forcibly exiled to Babylon).

70 C.E. Five hundred years later, the Second Temple was destroyed on the same date by the Romans.

On the 9th Av in 135 C.E., during the time of the Jewish revolt against Roman rule, soldiers led by Rabbi Simon bar Kochba were massacred in their final battle at Betar.

1290 The Jews were expelled from England in on the 9th Av.

1492 The Golden Age of Spain came to a close when Queen Isabella and her husband Ferdinand ordered that the Jews be banished from Spain. The edict of expulsion was signed on the 31st March and the Jews were given exactly four months to put their affairs in order and leave. The Hebrew date of their leaving was to be the 9th of Av.

How do we observe Tisha B’Av?

On the day before Tisha b’Av:

Towards the end of this day (the 8th Av), one should eat a final meal. It is customary to eat a boiled egg or lentils at this meal as these are traditional foods eaten by Jewish mourners. Some people follow the custom of eating a piece of bread dipped in ashes.

“This was the custom of Rabbi Yehudah bar Ilai: On The Day Before The Ninth of Av they would bring him a dry, salted piece of bread and he would sit next to the oven [the most unattractive place in the house (Rashi)] and he would eat it together with a cup of water, like one whose dead relative was lying before him.”

It is customary to eat the final meal while seated on the floor or on a low stool, just as mourners do during the week they sit shiva.

During Mincha (afternoon prayers) on the 8th Av Tachanun is omitted since the verse (Lamentations 1:15) refers to the 9th of Av as being a festival.

On the day of Tisha b’Av:

There are five activities which are forbidden on Tisha B’Av:

All adult Jews are required to fast on Tisha B’Av, including pregnant women and nursing mothers. Sick people do not have to fast, but should not eat ‘rich’ or indulgent foods or drinks. They should eat only that which is absolutely necessary for their physical well-being. Although one may eat after Tisha b’Av finishes, the custom is not to eat meat or drink wine until at least lunch time on the following day (10th Av). This is because although the Temple was destroyed on the 9th of Av, it continued to burn until the following day and consequently we refrain from meat and wine during that time.

The study of Torah is prohibited on Tisha B’Av because Torah study brings a person joy. However, one is permitted to study the third chapter of tractate Mo’ed Katan which deals with the laws of mourning and excommunication.

On the evening of 8th Av, the regular weekday Ma’ariv service is said. After the Amidah, Kaddish is said and Eichah is read, followed by the recital of Kinot (dirges). Following Kinot, V’Attah Kadosh, then Kaddish are said.

Our sages (Eichah Rabbah) wrote: “God said [to the angels at the time of the Destruction of the Temple]: ‘What does a mortal king do when he is in mourning? He extinguishes the lanterns [in his palace]. I too will do the same’, as the verse (Joel) states ‘The sun and moon have become darkened.’

At night only a single light is lit at the pulpit of the synagogue and the parochet (curtain) is removed from the ark. In many Sephardi communities it is customary to extinguish all lights in the synagogue and to light only one small lamp. After this the chazan announces the number of years that have passed since the destruction of the Temple.

Rama writes that each time the word eichah is read [i.e. at the beginning of the chapters], the reader should lower his voice.

In many communities the large tallit (prayer shawl) is not worn in the morning for prayers, and neither does one put on tefillin. The basis for this latter ruling is the fact that tefillin are referred to as being our “glory” and on Tisha B’Av our glory is absent. Tachanun is not said. 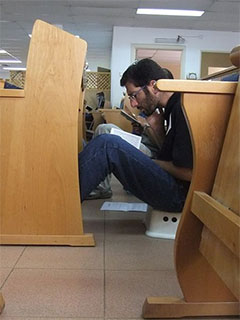 Reciting Kinot (dirges) in synagogue on Tisha b’Av. As a sign of mourning, congregants do not sit on regular seats (which are left in their upright positions) but instead on the floor or low objects

Selichot (penitential poems) are added to the Torah reading for the fast day. After the cantor repeats the Amidah, the chazan (cantor or prayer leader) adds the Anenu. The Torah is read from the portion of Va-Etchanan, beginning with the verse (Devarim 4:25) “It shall be when you bear children”, which speaks of the destruction of the land) and three people are called up. The third person called up reads the Haftarah for the fast (Jeremiah 8:13-9:23, which speaks of the Destruction of the Temple).

After the Torah reading, Kinot (dirges) are recited and are followed in some communities by a second reading of Eichah.

Some people follow the custom of visiting the cemetery on Tisha B’Av. The elders of Jerusalem used to walk around the walls of the city because seeing its ruins would create in them a sense of pain.

It is customary to give charity on every fast day, for it is said that the reward for the fast comes through the charity that is given to the poor on that day.

If Tisha B’Av falls on Shabbat, the fast is delayed until the following day.

The Torah is read again and three more people are called up. The third person called up reads the Haftara for the fast.

The Shabbat following Tisha B’Av is the ‘Shabbat of Consolation’ (Shabbat Nachamu). It’s name comes from the prophetic portion that is read taken from Chapter 40 of Isaiah, beginning with the words, “Nachamu, nachamu a’mi” (“Console, console my people, says your God.”) On this Shabbat and each of the following six Shabbats until Rosh haShanah the haftarah (Reading from the Prophets) will be a consoling passage from the Book of Isiah.