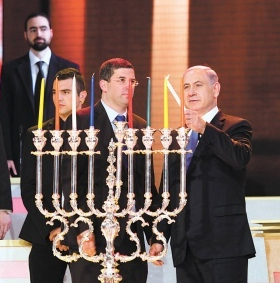 Prime Minister Netanyahu of Israel lighting a chanukiiah on 8th night Chanukah. He uses the shamash light (which, in this chanukiah, will be placed in the central location and higher than the other lights to distinguish it from them) to ignite all the other lights.

only specific mitzvah involved with Chanukah is the lighting of the chanukiah on each of the eight nights of the festival. The chanukiah has nine lights, in contrast to the menorah that has only seven. In ancient times each light consisted of an oil lamp with a wick, but in modern times many people prefer the convenience of using candles; either is acceptable. All the lights except one are at the same level (elevation), with the ninth light being at a different elevation so that it may be easily distinguished from and not confused with the other lights. This is because eight lights represent the eight days for which the ‘miracle of the oil’ lasted, whereas the ninth light is merely used to ignite the other lights.

The accepted procedure of lighting the candles is to start with one candle being lit and end up with eight candles lit on the last night, by increasing the number of candles each night. For example, on the third night three candles are lit and so on. This is to emphasise the increase in joy of commemorating the Chanukah miracle. By the end of the festival forty-four candles should have been kindled in total. The Talmud also suggests an alternate practice, decreasing the candles from eight on the first night to one on the final night, but nevertheless the practice is as described previously.

Each night the candle should be placed in the menorah, from right to left. The chanukiah has eight holders, plus an additional one at a different elevation to hold the  shammash, which is the candle used to light the others. The candles are lit from left to right using the shammash, so that the new candle is lit first.  To view a video on how to correctly light a chanukiah, click here. 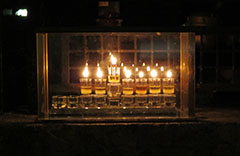 In Israel, many families have a chanukiah in a special protective case which they place and light on their front fence in order to publicise the miracle of Chanukah. This photo is of a chanukiah burning on 6th night Chanukah on the front fence of a Jerusalem home.

The chanukiah is usually placed in the front window of the house, on the opposite side of the doorway from the mezuzah. It is an old custom to light the chanukiah in the doorway. This is done to publicise the miracle by making the lit chanukiah visible to those in the street.

On Shabbat the Chanukah lights are lit before the Shabbat candles on Friday Night, and after Havdalah on Saturday night.

The candles used for Chanukah are often available in an assortment of colours, to further symbolise the happiness felt during this time. 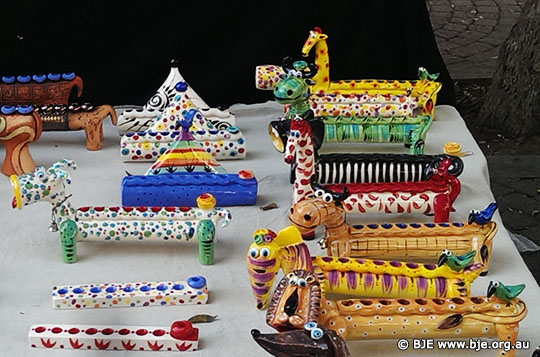 A selection of whimsically desgned chanukiot for children being sold at a Tel Aviv street market.
There is no limit to the designs possible for a chanukiah provided they comply with the
basic requirements of there being 9 lights, 8 of them in a straight line and on the same level, with the 9th placed on a different level in order to distinguish it from the other 8.

The Blessings for Lighting the Chanukiah:

(note: on the first night of Chanukah, an additional blessing called She’he’che’yanu is also said)