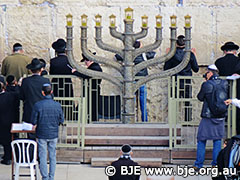 The chanukiah placed at the Kotel (Western Wall) during Chanukah

The term ‘menorah’ means ‘candelabrum’ and refers to the candelabrum found in the Temple in ancient Jerusalem. Some people also speak of the Chanukah menorah, but strictly speaking this is correctly called the chanukiah. The chanukiah has nine sockets. One of them is distinguished from the rest by being at a slightly different elevation; it may be in the centre of the others, to the front or the side of them. This light is referred to as the shamash or ‘servant’or ‘attendant’ and is used to light the other eight candles. The shamash was created because the rabbis decided that as the candles are holy, they should not be used to light each other or to serve other practical purposes, such as providing reading light.
There is no set design for a chanukiah and they are widely available in an enormous range of designs from traditional to modern whimsical designs. However, in order to be kosher (fit for ritual use), a chanukiah needs to have 9 lights with 8 of them in a straight line on one level, whilst the remaining light (the shamash) is on a different level or off-set to the rest so that it may be easily distinguished from the rest and identified as the shamash. Some chanukiah designs have the shamash located in the middle of the 8 other lights, and other designs have the shamash located at one end of the row with the 8 lights. 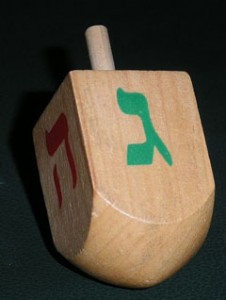 The dreidel is a four-sided spinning top that is used for a spinning game for children and adults. On each side of the top is a Hebrew letter, either a nun, a gimmel, a hey or a shin. These letters represent an acrostic of the Hebrew phrase Nes Gadol Haya Sham, which means ‘A great miracle happened there’, but in Israel the letters nun, gimmel, hey and peh are used and stand for the Hebrew phrase Nes Gadol Hayah Poh, ‘a great miracle happened here.’. This makes the game a reminder of the Chanukah miracle.

Playing dreidel was popular during the rule of Antiochus, before the Maccabees’ revolt, when soldiers executed any Jew who studied the Torah. When Jews gathered to study the Torah in secret, they usually had a dreidel ready. When they heard soldiers approaching they would hide the Holy Scriptures and pretend to be playing with the dreidel.

In Hebrew, a dreidel is called a savivon.

It is customary on Chanukah to give children Chanukah gelt. Gelt is Yiddish for ‘money’ and Chanukah gelt is real coins or chocolate wrapped with gold or silver foil to make it look like money. This custom is said to have originated in 17th century Poland. During Chanukah parents used to give money to their children’s teachers, to supplement their meager incomes. Eventually, the children themselves were given small coins by their parents, as a reward for studying hard. As Jews throughout Europe became emancipated and came into greater contact with Christians, they were influenced by the custom of giving presents for Christmas and started giving Chanukah gifts, as well as money.

This is a traditional food eaten during Chanukah. Known as latkes in Yiddish or levivot in Hebrew, they are patties of grated potato fried in oil. Indeed, most of the traditional Chanukah foods are fried or cooked in oil, to remind us of the miracle of the oil lasting eight days in the Temple.

These sugar-covered, jam-filled doughnuts are extremely popular in Israel during Chanukah. The doughnuts are dropped into hot oil without being shaped and therefore come out in odd shapes – the funnier the better!

It is a Chanukah tradition to eat foods containing cheese because of the story of Judith and Holofernes; perhaps she served them to him when she entertained him in her tent. Cheese pancakes contain both cheese and oil.