What is Chanukah and When Do We Celebrate It?

The name ‘Chanukah’ (also spelt ‘Hannukah’ in English) means ‘dedication’. The name of this Jewish festival commemorates the rededication of the Temple. An alternate explanation is that the word ‘chanukah’ consists of two parts: ‘Chanu’ means ‘they rested’ and ‘kah’ means ‘twenty five’. This recalls the day when the fighting stopped and the Temple was rededicated.

Chanukah is referred to as ‘The Festival of Lights’ or by another name, ‘Chag HaUrim’. This name describes the main features of Chanukah, which involves the lighting of a chanukiah (a candelabrum with nine lights). We celebrate Chanukah for eight days, from the 25th of Kislev (this usually falls during the English month of December). 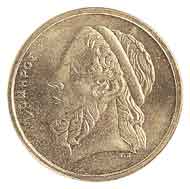 The Jews of Israel lived for many years under Greek-Syrian oppression. Around 168 B.C.E. the King of Syria, Antiochus Epiphanes ordered that idolatrous sacrifices be brought to the altar of the Temple and all the holy vessels of the Temple were destroyed. Jews were ordered to follow the Greek religion and were prohibited from studying Torah, observing Jewish holidays or practising Jewish customs. Some Jews obeyed these oppressive rulings, but others decided to revolt.

The man who started the revolt by killing a Greek soldier was Mattityahu the Hasmonean. Following this action, Mattityahu ran into the mountains with his five sons to hide. Many others Jews joined him and together they formed an army with Mattityahu’s son Judah Maccabee as its leader.

This Jewish army, known as the ‘Maccabees’, was much smaller in number than its Greek enemy. Nevertheless, they actually defeated the Greeks and succeeded in evicting them from Jerusalem. The first thing the Maccabees did was go to the Temple. Saddened by the state they found it in, with a statue of the Greek god Zeus standing in the Holy of Holies, they cleaned it up and repaired it to its former glory.

On the 25th day of Kislev in the year 165 B.C.E. Judah Maccabee rededicated the Temple and mounted a huge celebration where they lit the restored menorah. To do so, they needed oil, which they found, but only enough to burn for one day. But a miracle ensued: the menorah stayed alight for eight days, which was enough time for them to prepare more oil to keep it lit! Every year since, Jews around the world have celebrated the eight-day festival of Chanukah.

To Jews through the ages the Chanukah story has shown that the Jewish spirit cannot be crushed and Jewish practice will endure, no matter how harshly it is oppressed. Chanukah is celebrated as a festival of freedom and Jewish pride. 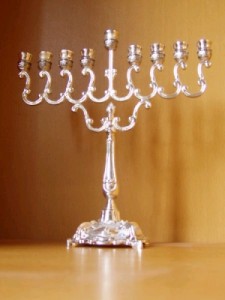 The word ‘menorah’ refers to the seven-branched candelabrum which stood in the Temple (Beit haMikdash) in ancient Jerusalem. One of the observances of Chanukah is to light the Chanakiah or Chanukah menorah each night, but this menorah differs from the Menorah in the Temple in that it has 9 lights (one for each night of Chanukah, plus an attendant light called a ‘shamash’ in Hebrew.)

On the first night of Chanukah, the shamash is used to light one candle or light on the chanukiah. On the second night, two candles are lit, and on every night thereafter, the number is increased by one candle. The chanukiah is placed near a window or a door so that it is visible to those outside as as to publicise the Chanukah miracle.

Blessings Said at Home for Lighting the Chanukah Lights

During the morning service, the entire Hallel is said on each of the eight days, and a special addition, Al HaNissim (‘For the Miracles’) is made in every Amidah as well as in Grace After Meals.

This is a hymn that is sung after the candles are lit. The words recall the miraculous defeat of Israel’s various enemies over the generations.

A dreidel is a four-sided top with the Hebrew letters ‘nun’, ‘gimmel’, ‘hey’ and ‘shin’ written one on each of its sides. It is used for a spinning game of chance. These letters stand for the Hebrew words Nes gado hayah sam, ‘a great miracle took place there.’ Inside Israel, where the miracle took place, the letters placed on a dreidel are ‘nun’, ‘gimmel’, ‘hey’ and ‘peh’ which stand for the Hebrew words Nes gadol hayah poh, ‘a great miracle happened here.’

Playing dreidel was popular during the rule of Antiochus, before the Maccabees’ revolt. When Jews gathered to study the Torah, which was strictly forbidden, they always had a dreidel ready. When they heard soldiers approaching, they would hide the Holy Scriptures and pretend to be playing a game of dreidel.

It is customary on Chanukah to give children ‘Chanukah Gelt’: a bag of real coins or chocolate coins wrapped with gold foil.  The word ‘gelt’ means ‘money’ in Yiddish. This custom comes from another meaning of the word Chanukah, which is ‘education’.

There are some special traditions which associate women with Chanukah. The most famous relates to the story of Judith and Holofernes.

During the Maccabee revolt, Judith’s hometown was besieged by Holofernes and his army. Judith, despite being a poor, shy widow, volunteered to go on a dangerous mission to try save the town. She dressed herself in beautiful clothes and went in search of Holofernes. Overcome by lust, Holofernes invited Judith to have dinner in his tent. After she plied him with wine and food, Holofernes fell asleep and Judith cut off his head. When the Greeks heard of this, they fled in panic, and thus Judith saved the town.

Since Judith, a woman, had been a primary agent of a Chanukah redemption, the Talmud declared that women should be included in the obligation to light the Chanukah candles. Since women are obligated to light, they can halachically fulfill this mitzvah and light candles on behalf of others as well. Women are exempt form working during the period the candles are burning.