Synagogue interiors, just like synagogue exteriors, vary widely in appearance and style. However, there are certain features which all synagogues share:

Seating. Synagogue services are often long, especially on Sabbath and holyday mornings, and seats are provided for those attending services. Orthodox synagogues have separate seating for men and women (children under Bar or Bat Mitzvah age are allowed in both the men’s and the women’s section; after Bar or Bat Mitzvah, a child may enter only the section for their own gender), but Reform synagogues (known as ‘temples’) have mixed seating. In many Orthodox synagogues the women sit upstairs from the men in a tiered balcony around three sides of the synagogue, leaving a large opening through which the women may see the Ark and the bimah and hear the service. However, other Orthodox synagouges have both the men’s and women’s sections on the same level (with a mechitzah between them), especially if space permits.

Mechitzah. A mechitzah is a partition and the term especially refers to the partition between the men’s and the women’s sections in Orthodox synaogues. A mechitzah is a safeguard prescribed by the rabbis to prevent inappropriate flirtatious behaviour between men and women during religious services, and takes the form of a screen or a curtain. In synagogues with a separate women’s balcony, the fact that the women are physically removed and in the balcony is often considered to be sufficient to fulfill the requirements of mechizah, but some machmir (religiously stringent) congregations do also have a physical screen at the front of the balcony so that there is not a clear view from the men’s section into the women’s section or back again. Reform temples, which allow mixed seating, do not have a mechitzah. 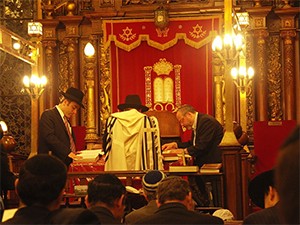 Reading the Torah in a synagogue. The Torah is being read by the man on the bimah with his back to the camera; the Torah scroll cannot be seen as it is lying on the reading desk behind him. In the background is a red parochet covering the Aron haKodesh. Congregants are seated in the foreground listening to the reading.

Ark (‘Aron haKodesh’ in Hebrew for Ashkenazi Jews, but Sephardi Jews call it by the Hebrew name ‘Heichel’). Considered the most important part of a synagogue, this is a large cupboard at the front in which the Torah scrolls (Sifrei Torah) are kept. A parochet (curtain) hangs across the front of the Ark and is beautifully decorated as a mark of respect to the Torah scrolls and to indicate their importance. The parochet is drawn back to reveal the contents of the Ark at certain points during synagogue services and whenever a Torah scroll is about to be removed from or returned to the Ark. In modern times the Ark in most synagogues is designed to protect the Torah scrolls it contains from both theft and fire although these features will not be apparent during a service (a Torah scroll is hand-written on parchment and takes about a year to write, hence it is a valuable item in monetary terms as well as for its religious significance). 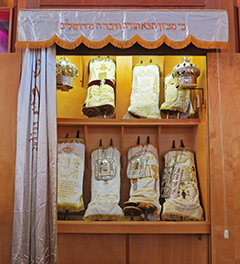 Torah scrolls in an Ashkenazi synagogue Ark (Aron HaKodesh) with the parochet drawn to one side to enable access. The Ark also has solid doors but these are folded back out of the way before the service begins.

Torah Scrolls (‘Sifrei Torah‘ in Hebrew; the singular form is Sefer Torah). These are not part of the building or its fixtures, but are essential in every synagogue as the Torah (the text written in the scrolls) is the foundation of Judaism and the public reading of the Torahis a central part of synagogue services on Shabbat mornings and at various other designated times. The Torah scrolls are kept in the Ark, but are removed when they are to be read or on occasions such asSimchat Torah when congregants dance holding the scrolls to express the joy of the day. Torah scrolls are handled carefully and respectfully at all times. Synagogues usually have several Torah scrolls and not just one.

Bimah. This is a raised area in the central part of the synagogue; on it is a reading desk where the open Torah scroll is placed when it is being read. The area is raised partly to ensure that everyone is able to see the Torah scroll being read and partly to convey the importance of the activity of reading the Torah. There is a protective railing around the bimah to ensure no one accidentally falls off the bimah and is injured. 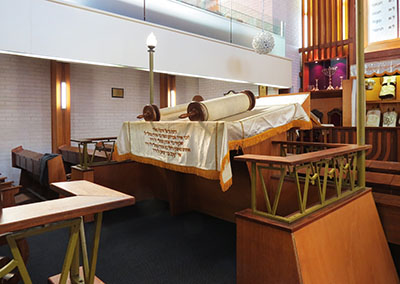 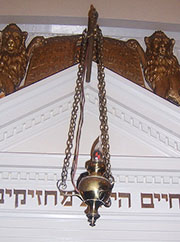 A Ner Tamid (Eternal Light) in a synagogue

Eternal Light (‘Ner Tamid’ in Hebrew). Above and slightly in front of the Ark is a light which is left on continuously; this reminds us of both God’s eternal presence and of the menorah in the Temple, the western lamp of which remained miraculously lit.

Maxim. Synagogues also have a maxim placed above the Ark. In most Australian synagogues this consists of the Hebrew phrase Da lifnei mi atah omed, ‘Know before Whom you stand’, a reminder to the congregation of God’s presence and to behave appropriately and with decorum.

It is also worth noting what is not found inside synagogues – statues and other depictions of the human body (stained glass, paintings etc) which the rabbis feel verge towards idolatry and therefore should be avoided.

Why are Reform synagogues called ‘temples’ and not ‘synagogues’?