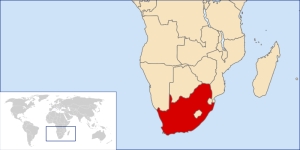 South Africa’s Jews are amongst the wealthiest and most successful in the Jewish world. Theirs is a small and ethnically homogeneous community (mainly Litvaks, numbering 92,000). There are many individual Jews who have made vast contributions to this young country.

Jews began arriving in South Africa from around 1800, but the major influx came from Lithuania, between 1880 and 1930. The first congregation was established in 1841 in Cape Town. The once-beautiful Gardens Synagogue (built in 1849) is now a Jewish Museum. There are currently 15,000 Jews in Cape Town; but 55,000 in Johannesburg, many of whom descend from those who arrived in droves to service the gold industry. While most South African Jews are of Lithuanian and Latvian descent, there are also Sephardic Jews in Cape Town, and descendants of German Jews from the 1930s. Now the Lemba, a black tribe that claims to be Jewish, is reviving abandoned synagogues.

The next generation excelled in finance and the professions, as doctors, teachers, accountants, journalists, and academics. Many have contributed significantly to national culture, like prize-winning authors, Nadine Gordimer and Dan Jacobson. Since the end of apartheid in 1994, Jewish politicians have included the ANC cabinet minister, Ronny Kasrils; and the leader of the opposition Democratic Party, Tony Leon.

South African Jews have suffered sporadic antisemitism from English and Afrikaner whites. However, their white identity afforded them advantages in a minority white-ruled society. The SA Jewish Board of Deputies remained largely silent over the evils of apartheid. Yet individuals were prominent in the anti-apartheid struggle, from the liberal Helen Suzman to the Communist Joe Slovo.

Most South African Jews are traditional in their religion (80% call themselves ‘orthodox’) and pro-Zionist (Betar and Habonim were both strong Zionist youth movements). Some 60% of Jewish children attend Jewish schools. While there are several Jewish communal publications, Yiddish has largely died out as a spoken language. The Chabad Hassidic movement has gained ground in recent years.

Jews tend to live in the larger of South Africa’s cities. Opposition to apartheid and fear of violence led many to leave for Israel (16,300 since 1948), Canada, USA, Britain, and Australia. Since 1970 some 50,000 Jews have left South Africa, while 10,000 Israelis have migrated to the country.

South African Jewry is a diminishing community, although most recently polled South African Jews said they felt confident in a newly democratic and black-ruled South Africa. Escalating crime and dwindling employment opportunities, however, have spurred many younger Jews to build their futures elsewhere. President Mandela has asked expatriate Jews to return to South Africa, but this seems unlikely to happen.