The great majority of India’s population are adherents of Hinduism, a religion whose history stretches back thousands of years. Hinduism is  very tolerant of other religions, due mainly to a tendency to regard the gods of other religions as being variant manifestations of Hindu gods. Such tolerance allowed Jewish communities to be established and remain in India for centuries. However, the majority of Jews left India after the establishment of the State of Israel in 1947; the majority settled in Israel, but significant numbers also moved to countries such as Australia.

The following pages have useful information about the Jews of India and their history: 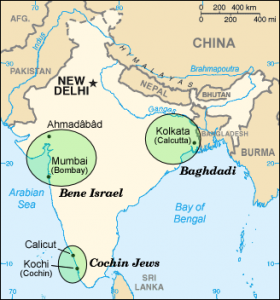 A map of India showing the locations of the largest Jewish communities. (Map courtesy of Wikimedia Commons and Eric Gaba)

Who are the Jews of India and what are their origins?

Jews in India by Aharon Daniel

Wikipedia: History of the Jews in India

Books about the Jews of India:

‘Who are the Jews of India?‘ by Nathan Katz

‘The Jews of India‘ by Benjamin Israel