Holocaust survivor Eliezer (‘Elie’) Wiesel was internationally renowned as a persistent literary witness to the Holocaust. In his work, Wiesel wrote specifically about surviving the horrors of the concentration camps and, more generally, about the issues surrounding man’s inhumanity to man.

Elie Wiesel was born on September the 28th 1928 in the small town of Sighet in Transylvania (at that time in Romania, later part of Hungary, and now again part of Romania). He was the only son of four children in a close-knit Jewish family. While the family spoke Yiddish at home, they also knew German, Hungarian and Romanian. Other languages such as Ukrainian Russian were also widely spoken in Wiesel’s birth-town. Elie was well educated in Hebrew Studies, concentrating predominantly on mystical tradition and folk tales of the Hassidic sect of Judaism to which his mother’s family belonged. 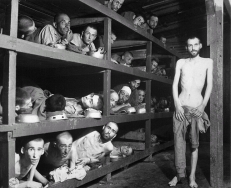 The events of World War II and the subsequent arrival of the Nazis in Sighet in 1944 changed Wiesel’s life forever. The Jewish inhabitants of Sighet were deported to various concentration camps in Poland. At the young age of 15 Elie was separated from his mother and younger sister at Auschwitz, never to see them again. He managed to remain with his father in Auschwitz for the next year until his father’s untimely death in January 1945, only months before the end of the war.

After surviving the camps of Auschwitz, Buna, Buchenwald and Gleiwitz, and being liberated by the US Third Army in 1945, Wiesel spent time in a French orphanage. In 1948 he began his academic studies in Literature, Philosophy and Psychology at the Sorbonne (a university in Paris). At that time he became a professional journalist, writing for newspapers in both France and Israel.

In 1955, after ten years of a self-imposed vow of silence, Wiesel set down his memories in Yiddish, in a 900-page book entitled Une die welt hot geshvign (‘And the World Kept Silent’). Later, Wiesel condensed the book into a 127-page French adaptation, La Nuit (‘Night’). This book has since been translated into English, among various other languages. Wiesel subsequently wrote over 40 additional works dealing primarily with Judaism and the Holocaust and the broader themes of human morality.

In 1955 Wiesel moved to New York City and by 1956 had become naturalised as an American citizen. In 1969 he married Marion Erster Rose, an Austrian survivor of the Holocaust; their son, Shlomo Elisha Wiesel, was named after Wiesel’s father. 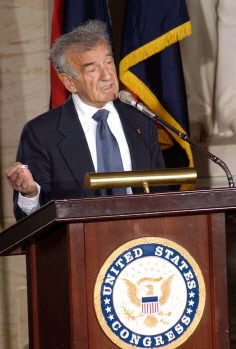 Elie Wiesel addressing the US Congress

In 1978, US President Jimmy Carter appointed Wiesel as the Chairman of the United States Holocaust Memorial Council, a position he held until 1986. In 1985 he was awarded the Congressional Medal of Freedom and in 1986 he received the Nobel Prize for Peace. These are just two of the many prestigious awards received by Wiesel during his lifetime. Wiesel also held the position of Andrew Mellon Professor of Humanities at Boston University from 1976 onward.

Elie Wiesel dedicated his life to writing about Judaism, the Holocaust, and the moral responsibility to fight hatred, racism and genocide. His own words most aptly describe his commitment: “Never shall I forget that night, the first night in camp, which has turned my life into one long night, seven times cursed and seven times sealed … never shall I forget those flames which consumed my Faith forever … Never shall I forget these things, even if I am condemned to live as long as God himself. Never.”

Wiesel dedicated the latter part of his life to educating second-generation Jews, instilling in them the importance of memory and action, tools that they must be equipped with when the survivors have left us.