Rabbi Shimon bar Yochai (in English, Rabbi Simon bar Yochai or Rabbi Simon son of Yochai and, in Hebrew, also known as Rashbi) was a sage mentioned in the Mishnah and is widely regarded as the author of the Zohar, the major text of Jewish mysticism (Kabbalah).

Rabbi Shimon bar Yochai was a student of Rabbi Akiva‘s and, like him, lived in the 2nd century CE, a time when Rome occupied and controlled the Holy Land.

According to Jewish tradition, Rabbi Shimon made critical remarks about the Roman occupation which were reported to the Romans who then condemned him to death. Rabbi Shimon was then forced to flee with his son and take refuge in a cave in northern Israel. Miraculously, a carob tree sprang up in the entrance to the cave and a spring of water appeared, thereby supplying Rabbi Shimon and his son with both food and water. To prevent their clothes from wearing out, they wore them only when praying and spent the rest of the time covered in sand (for the sake of modesty) whilst engaged in religious study.

Rabbi Shimon and his son remained in hiding in the cave for 13 years, emerging only once during that time. On that occasion, they observed other Jews farming and engaged in everyday occupations to support themselves and Rabbi Shimon commented to his son, ‘How can people be so busy with matters of this world and neglect matters of the next world [religious study]?’ A heavenly voice called out to Rabbi Shimon, telling him he was no longer fit for human company, to mend his attitude and return to the cave in the meanwhile. Rabbi Shimon and his son then returned to the cave where, eventually, another heavenly voice informed them that the Roman Emperor had died, the decree against them was no longer in effect and it was safe for them to emerge from hiding. Rabbi Shimon subsequently became a great sage and respected religious leader of the Jewish people. 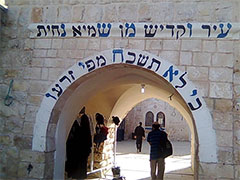 Rabbi Shimon bar Yochai is remembered particularly on Lag baOmer (the 33rd day of the counting of the Omer) which is the anniversary of his death. He and his son Elazar are buried at Meron (also spelt ‘Meiron’), near to Safed (Tzfat) in the Galilee region of Israel, and Hasidic Jews in particular have a custom of making pilgrimage to his grave site on the anniversary of his death. The reason that Hasidic Jews in particular do this is that Hasidic Jews have a particular interest in Kabbalah (Jewish mystical traditions) and Rabbi Shimon is widely believed to have authored the Zohar, a major Kabbalistic text. 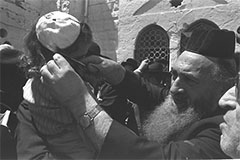 Other traditions which are particularly associated with Rabbi Shimon’s yahrzeit (the anniversary of his death) on Lag baOmer are making bonfires and giving 3 year old boys their first haircuts. The Kabbalah compares the hair of a young boy to the fruit of a tree which the Torah says may not be picked until the tree is 3 years old; as a result, many religious Jews, and especially Hasidic Jews, have a custom not to cut a boy’s hair until he turns 3 years old. Each year a large number of Hasidic Jews take their sons who have recently turned 3 years old with them to Meron where they have their first hair cut.

There is also information about Rabbi Shimon bar Yochai on our Lag BaOmer page.


Chassidic Jews celebrating the life of Rabbi Shimon’s at Meron, Israel, on his yahrzeit