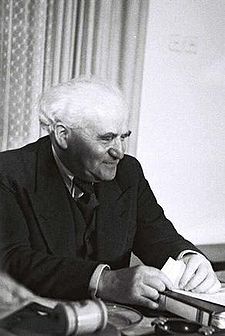 David Ben-Gurion was the first Prime Minister of Israel. He came to epitomise the Labour Zionist movement, and steered its ideological development. He set the direction of the Israeli economy and political structure, leading the country through two major wars.

Born David Gruen on 16th October 1886 in Plonsk, Russian-ruled Poland, Ben-Gurion came from a family already suffused with Zionist ideas. At age 20 he immigrated to Palestine, which was then under Turkish rule, and farmed in Galilee.

Gruen took the Hebrew name Ben-Gurion, meaning ‘son of a lion’. In 1907 he ensured that the Zionist socialist party, Po’alei Tzion, committed itself to Jewish independence. He also helped create the first kvutzah (group; prototype of the collective kibbutz), and the first Jewish self-defence group, named Ha-Shomer (The Watchman).

Turkish authorities expelled Ben-Gurion from Palestine during World War I. Ben-Gurion headed for New York, where he met and married Pauline Munweis. After hearing of the Balfour Declaration in 1917, he joined the British Army’s Jewish Legion. Returning to Palestine under the British Mandate, Ben-Gurion set up the powerful histadrut, a confederation of Jewish workers in 1920. 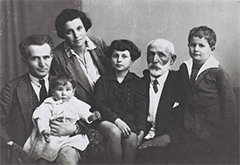 David Ben-Gurion photographed in 1929 with his wife, children and father

In 1939 Britain abandoned its plans for a partitioned Palestine. An angry Ben-Gurion called for resistance, and in 1942 oversaw the Zionist convention in New York that decided to set up a Jewish commonwealth after the war. However, unlike the Revisionists, Ben-Gurion stopped short of attacking British troops.

In 1947 the UN voted to establish two states in Palestine, one Jewish and one Arab. British troops evacuated, and in May 1948 Ben-Gurion declared Israeli independence. As premier and defence minister he defended the new state against Arab attacks. However, post-Zionist historians suggest that Ben-Gurion also authorised the departure of some 700,000 Palestinian Arab refugees.

After winning the first election resoundingly in 1949, Ben-Gurion put much effort into absorbing thousands of new immigrants and refugees. He also cemented Israel’s education system and military, and sought to revive desert lands. He established Sde Boker, a kibbutz in the midst of the Negev desert.

An ill-conceived spying campaign in Egypt resulted in the Lavon Affair in 1954. A decade later, it sank Ben-Gurion’s career, despite his having handed over the premiership to Moshe Sharett between 1953 and 1955. Back in power, he joined UK and French troops in fighting Egypt during the Suez Crisis, 1956, and held on to the captured Sinai Peninsula for a year.

Ben-Gurion resigned as premier in 1963 over the Lavon Affair. In 1965 he founded a new party, Rafi, but it failed to oust Mapai. In 1970 Ben-Gurion left the Knesset (Israeli parliament) for his home at Sde Boker to write his memoirs. He died in 1973.

David Ben-Gurion was a complex figure, a Bible scholar who idealised the goal of a secular state of Israel, and a democrat prone to authoritarianism. Yet without his persistence and vision, modern Israel may never have been born.

Links to Other Pages About David Ben-Gurion

An Interview with David Ben Gurion (recorded in 1956)